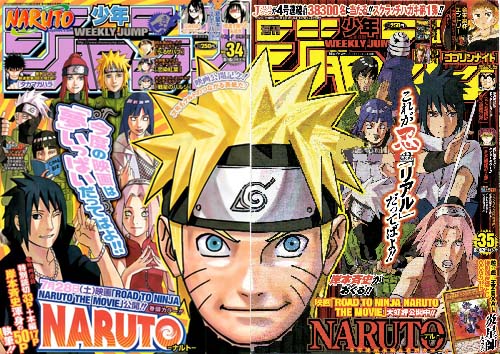 One of the best issues of Weekly Shonen Jump this year, and yes it does have to do with the all of the big three having decent chapters. Another impressive showing from Nisekoi and overall good displays from Beelzebub and Kuroko no Basket.

Apologies for the late post, I've been preoccupied with an array of real life dealings. 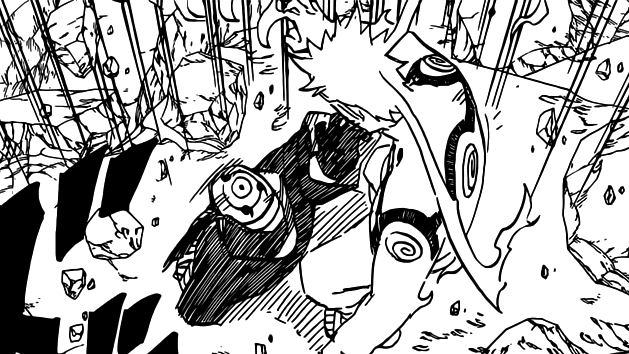 A chapter dedicated purely to action sequences with minimal dialogue provided a lot of much-needed excitement for Naruto.

I must say that it was a little hard to follow at times, and with the numerous panels on certain pages it sometimes became difficult to know where to look but this chapter definitely did its job in kickstarting the fight between Naruto and Tobi. Tobi's mystery still keeps us in the dark about the extent of his powers and so the fight further clarifies his strength, adding onto the only other time we got a glimpse of his full strength in his fight against Konan but it also raises the question how Naruto is going to beat Tobi in the end; if he can't even beat him in his bijuu mode with the aid of Kakashi and Guy, how will he accomplish this feat Will we have to witness yet another power-up We did see Tobi render Kakashi's Mangekyou Sharingan useless and Gai could barely touching

Now with the revival of the Jyuubi well on its way, it look like the story has just about reached the climax and the last panel just confirms it. I'm hoping that next chapter will be the one to finally reveal the true identity of the masked terrorist but I don't want this to happen if it means entering into another flashback arc where the story is fully explained. Don't get me wrong, having the flashback arc at one point will be good but seeing as how we've been subjected to weeks upon weeks of flashbacks not too long ago with Kabuto as the main focus, I want to see more fighting before the full story is revealed.

Finally a chapter that makes me remember when I used to enjoy Naruto a lot. It may suffer from timing but it was definitely one of the best I've seen in a while from this series. 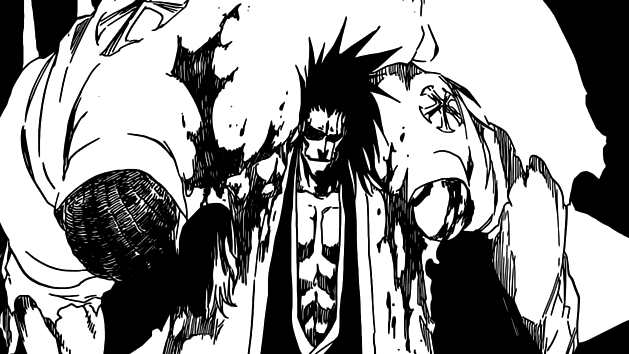 Byakuya's death and subsequent departure from Bleach may be disputed by his fans but at least it was handled well and the end of the chapter gave me something else to look forward to.

There was a lot of opinion on the net before this chapter came out that Byakuya should in fact kick the bucket, so presumably this development in the plot would have left a lot of people happy. Killing off a major character who is viewed as one of the strongest in the series is never an easy thing to do and if it's not handled properly it ends up doing the series more harm than good however if it's done well it makes the series that much better; this one fell in between the two opinions. Unfortunately I didn't feel much emotion for Byakuya's death unlike the time Jiraiya was killed off in Naruto, which irks me a little since Byakuya was always one of my favourite characters in Bleach. I think the main reason for this had a lot to do with the fights short(ish) length but it may have also been due to the multiple fights occurring at the same time.

That said, Byakuya's last moments in Bleach were touching and resembled Ginjo's a little. In particular, I liked how he asked for forgiveness in his final moments and then disappeared. Now what followed is an equally important development in this arc but before that happened it only made sense that Renji was stopped accidentally from releasing his bankai. I've been yearning for Kenpachi's re-entry into the story ever since his short-lived appearance in the Fullbring arc where he took out his opponent in one swing and got no other panel time, so having be the focus for the next chapter or two seems like a godsend. This is where the story gets a little more unpredictable...... We know that Kenpachi doesn't have a bankai, making him the best possible opponent (aside from Mayuri) to fight Quincy but he's challenging the King, whose powers have yet to be displayed and on top of that a character who's more befitting as Ichigo's final opponent.

Whether Kenpachi fights the King or not is yet to be seen but no one can deny how epic his entrance was. 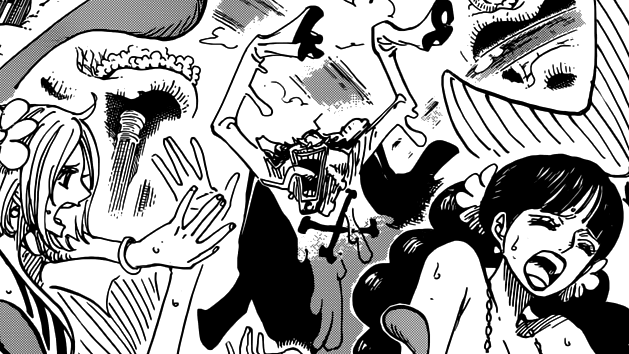 In an odd turn of events One Piece ended up being the most boring of the big 3 this in this issue.

It wasn't bad but nothing notable happened in this chapter except the continued build-up/countdown to the destruction of the island and the expected turning point of the arc. I will say that I was surprised to see Law surrendered his own heart to Ceaser so that he may become his subordinate, possibly hinting to his desperation to achieve his goal of defeating one of the yonkou.

Other than that, it looks like Ceaser isn't able to control Smiley which serves a reminder to the fact that he may have a high bounty but he isn't exactly the strongest character out there whom Luffy and Co. have faced. 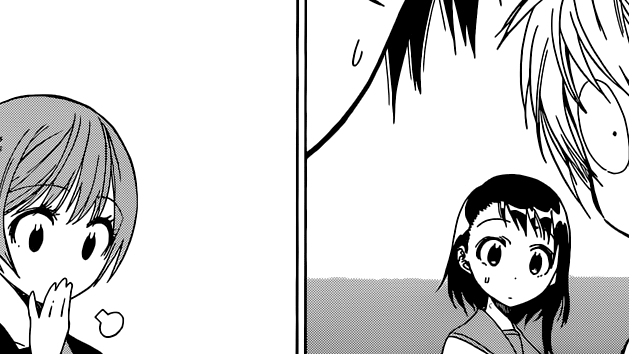 Now that the three girls have gathered Raku has to turn himself into a detective and figure out which one is his promised girl.

I guess I like this chapter of Nisekoi for the being a defining point in the manga more than anything else. Sure there was all the usual comedy and humour we are used to, coupled with the fantastic facial expressions the characters where (Onodera's white out face is just too funny and adorable) but when Raku definitively stated that he must figure out which of these three girls is the "one," the story can now progress from being all about the comedy and humour to exploring each of the characters and allow for romantic development.

There is always a lifespan on a romantic comedy having more comedy than romance so it's nice to see Komi-sensei changing up the plot progression of the story. Looking back to chapters 27-29, when the romantic developments were at their best thus far, I'm really looking forward to seeing a more serious romantic plot for Nisekoi but not one completely void of humour. 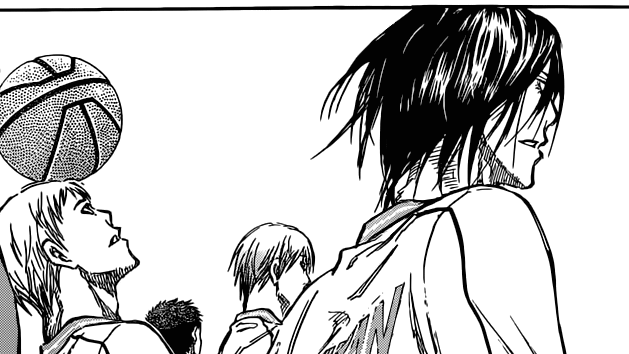 The stage for Rakuzan v Shutoku is now set and what better way to do it than big up Rakuzan's strength.

A while back Kuroko mentioned that Akashi was in the habit of winning and that he never lost, so we always knew about his dominance as the captain of the Generation of Miracles but evidently that wasn't enough to build up his character so this chapter took it one step further. As it was pointed out to us ever so nicely by a couple of the Shutoku players, Akashi being the captain of his team is just strange since he's a first year on a team with 3 out of the 5 Uncrowned Generals. It's been established that the Uncrowned Generals may not be as strong as the Generation of Miracles but they're certainly no pushovers, thus making Akashi to be an even more dangerous opponent whose skill we have yet to see.

I do like how Midorima was shown to be more serious with a look in his eye which indicated he was out for blood, something that's new and a bi-product of his loss to Seirin way back when. Midorima's frustration is depicted quite often in sports series and is even brought up in Eyeshield 21 which quoted Darell Royal's Letter with possibly one of the most inspiring letters about losing and it's necessity for becoming a champion.

The chapter ended with Midorima bringing the heat right off the bat, which is making me excited for what happens next. 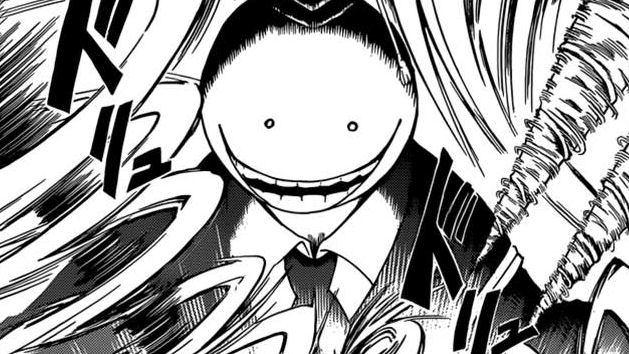 Karma-kun is such a problem child that Koro-sensei might have to turn into Great Teacher Onizuka to sort him out.

Karma has been introduced as the first actual problem child in Class E and his acting out resembles that of any of the problem children in GTO. The chapter as a whole was quite uneventful and even Korosensei's threatening demeanour at the end was the expected ending that bore little fruit, making this issue's chapter of Assassination Classroom the most boring one yet.

Of course that is to be expected whenever your building up the new character and subsequently the new direction of the story but it feel a little rushed. Not much else I can say. 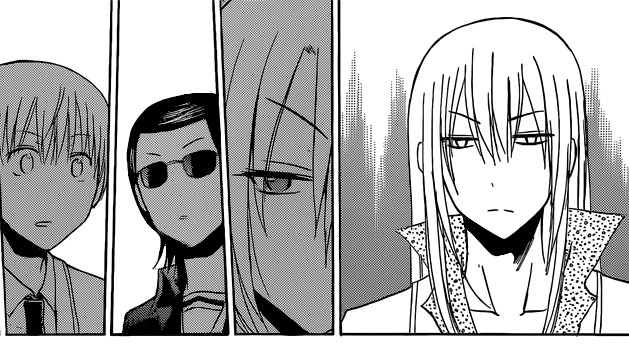 More comedy in this chapter coming at the expense of my favourite delinquent character in this series leaves me with little to complain about. The chapter didn't accomplish much and we didn't learn all that much about Beel's mother except that she and Hilda were quite close, an interesting revelation considering how highly Hilda respects the "Royal Family" and otherwise doesn't make friends.

I can't imagine this arc continuing on for much longer and I'm interested to see if the painting will end up being a serious part of the story or if it was just another "side quest" like arc which will be ignored in the future. 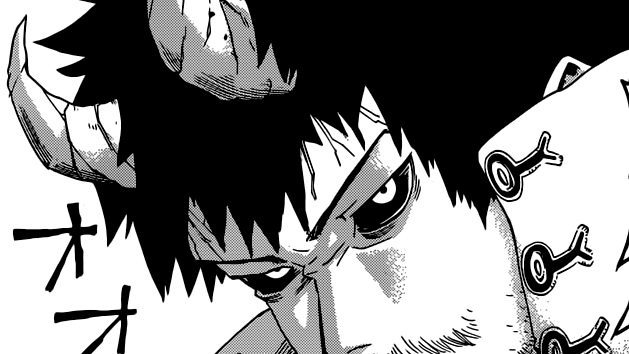 Astro's sudden surge in power levels and the appearance of Mr. Black are hinting towards Sensei no Bulge is heading towards it's premature end.

It's a pity but understandable when you take into account how hard it is to keep a manga serialised in Shonen Jump, not to mention an action-adventure series which will undoubtedly be compared to the Big 3 and Toriko.

The chapter wasn't anything special, in fact the series has been just fine for a while now and the ending when Mr. Black appears was just another addition to the just fine moments this series has had. I would have liked to see this series get more of a chance to develop, so that it wouldn't be rushed but now that it's happening this series has turned into a weaker adventure series. 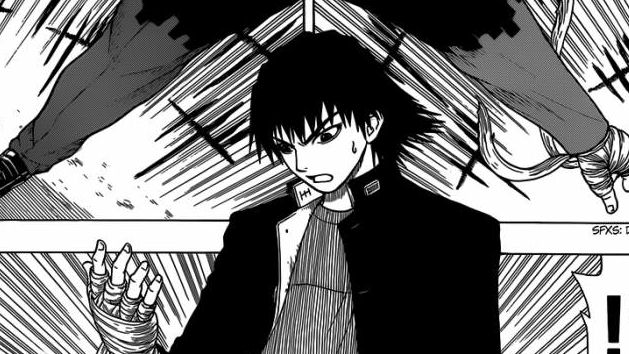 After the last chapter I started becoming more accepting of Takamagahara, and I think this chapter may continue my gradual acceptance of this series.

What initially started off as a rather lame story of a boy discovering his superpowers has turned into a much better setting whereby an organisation is out there hunting down people who have awoken their powers; I much prefer this to the initial boy discovers powers but wants nothing to do with them premise which took up the first three chapters because it has more potential to be interesting.

The concepts captured in the chapter are those you find in stories involving people with superpowers (namely the persecution of those with powers), something I enjoy a lot because it's a Western concept that is often captured very well in anime and manga. Yamada's boss' power resembles that of Solid Script from Fairy Tail, befitting his boring character which incidentally adds a little bit of comedy to the whole situation.

The chapter ended at a much better point when compared to the previous 3, at least enough to keep me intrigued.