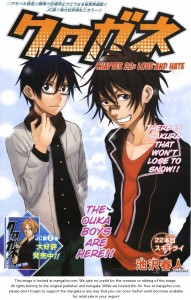 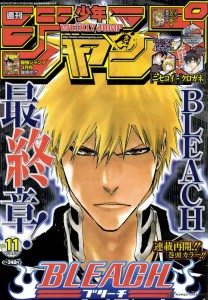 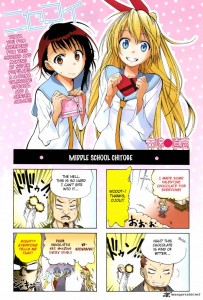 Since I read a lot of series running in Weekly Shonen Jump and reviewing each of them in their entirety would take a long time, I decided that it would be faster to do them all in one go. Unfortunately I can't review Kuroko no Basket since, it is behind in scanlations but I will be doing so for the following series:

So first off let me put this weeks chapters into order of preference and then review the chapters individually. (NOTE: Since some people reading multiple series might not yet be caught up, all of them will be done in spoiler form.

[spoiler intro= "1" title="Bleach"]Finally after about a year of being disappointed by the fullbring arc, Bleach starts off fresh with it's last arc! When it came to how much the story progressed in this chapter, I can't really say that it was exciting but it was a nice start to the new arc. Arguably, we can already tell that this arc will have a lot to do with the Quincy and unless that changes we can expect this to be a test for Ishida and Ichigo. Hopefully this arc will bring about a lot of excitement and answer the many questions we have: What is the deal with Ichigo's dad Will we meet the Royal Guard Any more bankais to see [/spoiler]

[spoiler intro= "2" title="Naruto"]Much like Bleach, this weeks Naruto chapter was not particularly action-packed nor did it advance in the story; until the very end at least. I honestly liked this chapter in the sense that it was long overdue - Naruto's friends finally relieving him of carrying all of the burden by himself that is - and now with everyone gearing up to take on the Masked Madara and Sasuke's appearance at the end of the episode has made things even more exciting by setting up the story for the final and long awaited battle; Younger vs Older brother, Senju vs Hashirama, Naruto vs Sasuke.[/spoiler]

[spoiler intro= "3" title="Beelzebub"]I never did figure out why I got into this anime, then manga so much! Yes sure a comedy manga regarding a demon lord and a delinquent who is being forced to raise him seemed a bit odd when I first started off with it but it quickly grew on me. Finally this week with Hilda's memories returning, the story itself can continue to progress; where it's heading I have no idea since this manga is more like a comedy that was then put on a story-type track. I did like that now Oga and co. will be spending more time with Kanzaki because that means we can expect more humour that comes from both of these delinquents interactions but also because Beelzebub's strength lies in it's ability to seem like a manga with no set plot but then has a plot/sub-plot appearing out of nowhere.[/spoiler]

[spoiler intro= "4" title="One Piece"]Surprising that I would rank one of the most popular series in the world so low Well when you put in a new character that looks like he belongs in Thriller Bark, you start to question whether Oda-sensei is even trying anymore! I wasn't impressed with the appearance of a dragon last week, so this weeks development left me even more unimpressed than last week so much so that I could care less about the fact the talking legs man was asking for a shichibukai - ok that was a lie especially since for a second I thought that the legs man could possibly be Buggy! - in the end with everything that happened this chapter did give off the feeling that it might be a set-up chapter for something even better next week![/spoiler]

[spoiler intro= "5" title="Kurogane"]Well not much to say about Kurogane except that it was just a nice "cute" chapter which focussed more on the character development of a newcomer than any progression in the storyline itself. Aoharu's personality itself wasn't particularly unexpected but it was still a necessary chapter since Kurogane is a Jump manga; friendship must prevail![/spoiler]

[spoiler intro= "6" title="Hunter x Hunter"]What an anti-climactic chapter this turned out to be! Not just because the presidential election itself was great leading up to this chapter and then suddenly ended in a few pages of this chapter but also because the basis of the whole Hunter x Hunter story was Gon's desire to meet Ging, an event that occured rather half-assedly and kind of ruined the story for me; treating this like comic event rather than a serious one made it a rather poor read. Killua's ongoing fight with his brother also happened to make an appearance on the last page and made question how long it's going to last. Best part of the chapter: Pariston's choice to make Cheadle chairman since that has made him into an even more interesting character.[/spoiler]

[spoiler intro= "7" title="Magico"]If I compared this one to the rest of the chapters, it was pretty awesome. Shion's personality shines through as usual and comes with a new ability making him look like Dark Magician from Yu-Gi-Oh! (whether an intentional move or not, I'll leave up to others to decide) but after all since this arc has been going on for quite some time I did find it hard to get more into the story - the whole sibling rivalry thing is also getting rather boring.[/spoiler]

[spoiler intro= "8" title="Nisekoi"]A little frustrating and predictable this chapter. I never thought that this manga would decide to go at a quick pace like the one it has already set but this chapter was not very satisfying. Onodera get's ambushed into confessing and throughout the whole of the chapter is actually a little annoying and at the end where Chitoge remembers a promise she made with a boy, leading to a love triangle emerging is just as bad! Hopefully next week will come with more interesting developments.[/spoiler]

[spoiler intro= "9" title="Bakuman"]It quite literally saddens me with how the manga artists have decided to turn out such a pitiful arc! Really Otaku's get THAT pissed off if a voice actress they love is dating a manga artists who is reputed for high quality work The chapter was not only a little bit frustrating since I was quite happy that an end was in sight for Bakuman (all the signs were there) and I even agree with the authors' view that it's okay to have shorter works that don't last more than 200-300 chapters but this was a completely terrible move in my opinion. Hopefully this will just be another minor setback like the rest of them that have been popping up since around chapter 160.[/spoiler]