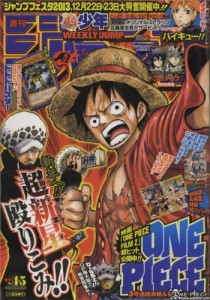 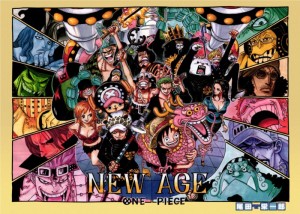 Merry Christmas to all on the day I decide to write this very long post on top of the others I'm working on. As the last Weekly Shonen Jump I'm reviewing this year, there's a lot that needs to be said so I won't waste any more time. 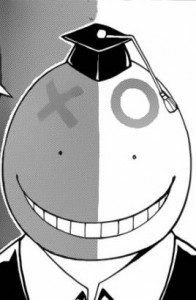 Remember this series I certainly do. In fact, I'd write about it if the scans were up-to-date all the time, especially since this is one of Weekly Shonen Jump's new stars. If you're the type who waits to see if a manga fails or not, then start reading because this one is gonna be around for a while.

Right now the manga is giving each character something like a 2-3 chapter arc each to get us better acquainted with everyone. Personally I like this idea because the number of kids in that class is actually pretty high, and this is a series that doesn't really focus on the main character - excluding Korosensei.

Finally it's back to bitch-sensei! A character that has faded into the background as the story has gone by. She has even been surpassed by Kurasuma in terms of presence, despite being one of the more comical characters in the series. This next arc should bring more attention to her.

This looks like another arc in the main plot that'll have Korosensei destroying the skills of an accomplished hitman. We haven't had one of those in a while, though I can't say it's been forever. Regardless, this should be fun to read for the next chapter or two. 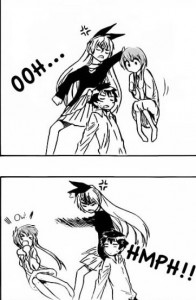 What do you know, a story about Marika and her poor studying skills.

Another hallmark of the romantic comedy genre is to have a girl lacking in smarts, thus giving the author opportunity to draw another chapter of wish fulfilment for the fans of said girl character. Most of you already know who my favourite is, so I won't bother saying why I was disappointed.

Aside from personal preferences, this chapter was alright. It has a lot to do with the type of character Marika is, and that works well with Chitoge's secret crush on Raku. The comedy may be obvious but Marika's shameless attention seeking is kind of hilarious.

That wasn't all there was to the chapter; a more serious plot is possibly afoot. We haven't really paid attention to Marika's health problems because they were downplayed during her introduction and they weren't brought up in a serious manner ever again. This does mean there's potential for some drama in Nisekoi, and that could be either good or bad.

Generally, I think romantic comedies should stick to their genre without venturing into the dramatic side of things but I have seen it done well. Hopefully the drama won't be over-the-top, which has never been the case but can happen given the setting. 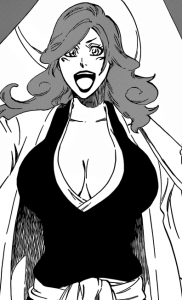 That was shorter than I expected, in a good way.

With the current arc focusing on each of the Royal Guard captains, it would have been easy to drag out the chapters with pointless amounts of explanations and anything else that could slow down the pace. Luckily Bleach is getting to the juicy core of the story at just the right pace.

After last chapter's "OMG" moment, you can't help but expect the next chapter to leave an impression. Nothing against the manga, most of the time it's just too damn hard to follow a big bombshell being dropped with the next chapter. Doesn't matter what series it is, it's no easy task yet Bleach makes it look easy.

This chapter was completely different from the previous one. Adopting the "all fun and games" approach, it was a light-hearted chapter with ample comedy that we see here and there in the series. As I said, the easygoing nature of the chapter was perfect with the way it exploited the comedy to make the meeting with Kirio Hikifune short and sweet. To finish, we got a lovely dose of news for the next chapters.

Each Squad Zero member is responsible for a contribution to Soul Society. That wasn't the best part; the next captain Renji and Ichigo are meeting gave birth to the zanpakuto! Another "OMG" moment for sure, and this new piece of information is great for something we've only known for a short time. It looks like Ichigo will recover Zangetsu sooner than expected before heading off to see the final two, who probably possess some even more ridiculous skills.

Things are getting good!

I still don't know why I like this series so much, but this chapter helps with that.

This chapter was a short and sweet battle, in an ongoing war. A battle that is quite important in the struggle to stay popular in the harsh world of Weekly Shonen Jump. For me, it's a win.

Essentially this chapter works on two levels: first of all it introduces a new character and second of all, it provides great comedy. Oddly enough, the latter has a lot to do with the former since it was the new character that provided the majority of the laughs for this chapter.

She has a resemblance to Tsukimi Kurashita for both character and appearance, so she's instantly likeable in my book. Shy, anxious, constantly worried, the complete opposite of Souma, a little clich but works extraordinarily well with the story. Even as an addition to the inevitable harem, she has a quality that'll make her my absolute favourite. I like this new girl!

If she wasn't enough, that double page (snippet above) was the right mix of messed up and hilarious. More often than none, it will be used as a way to sneak in ecchi but in this chapter it makes for some random laugh-out-loud fun.

Shokugeki no Souma is a little shameless and obvious, but it's so entertaining. One of the most entertaining in Weekly Shonen Jump actually. 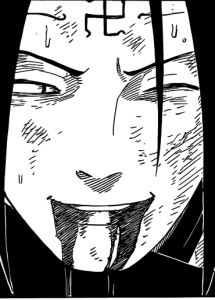 I'm a little sad to write my thoughts on this chapter. Not just because Neji was the next casualty, but also the cheesiness of it all.

You know I really can't stand whenever a moment is ruined by obvious and unnecessary dialogue. These moments would be a lot better if they were just stripped of all the corny lines and allowed to be simple and emotional moments of death. This was one of those moments, but I refuse to rant (excessively) on Christmas.

Neji's sacrifice did have a lot of significance to the story. From one point, he (potentially) left the world like his father did and chose to sacrifice himself to save Hinata and Naruto. From another point of view, he gave up his life to save the man responsible for his change. Yet again the former wouldn't be possible without the latter.

Meaningful or not, I'm sad to see Neji go. When I started watching the anime he instantly became one of my favourite characters. Him and Naruto's bond was one of the more important ones in my opinion, so the death will probably lead to a raging Naruto.

Another one bites the dust. 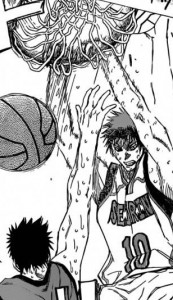 You know the current game is a filler when the last boss appears to observe from the stands.

Countless times I've stated that this is a filler arc on the way to the final one. With this chapter, we've finally arrived at the last leg of the race and we're just about ready to see the ending. The outcome is all but decided, however there might be something else waiting to happen.

Akashi and Rakuzan's appearance may signal the end of this game, but I refuse to accept that it'll end so easily. A few chapters back, an end of chapter narration stated that Seirin will struggle with being the leading team and I don't think we've seen that quite yet. They had one or two problems that were instantly resolved, so I don't consider them to have struggled enough to make the words of chapter 192 come true.

We'll get to see whether or not that's all in the next chapter. It wouldn't be the a fitting end without the return of Kise and Kuroko onto the court. As the only Generation of Miracles left between Kagami and Akashi, it's time for an all out brawl to determine the victor. Given the "guaranteed victory," this may be the only time Kise could enter the zone and stand a chance against Kagami. I still doubt that'll happen because Kuroko is now on the court.

Can't wait for the conclusion! 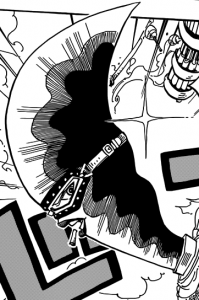 Speaking of conclusions, the Punk Hazard is on the verge of concluding after an uncomfortably long stay. It's at least doing so rather well.

We get to see a little more from Franky's fight, which was a nice way to start the chapter. It pretty much showed us the two members of Doflamingo's crew and what they're capable of and nothing else. A good way to get an idea about the strength of his crew as well as building up to the capture of Ceaser; an important event and purpose of this arc.

As we moved on, the beginning became forgotten and was replaced by Monet's last words with Joker and his final order. This is literally ending the arc with a bang, and it has potential for an interesting arc epilogue that we usually get with One Piece. I am interested to see how the Straw Hats will escape this - my suspicions lie with Law and his crew - and most of all, I'm thankful the arc is finally concluding.

All that's left now is to sit back and watch the aftermath. If the colour page (at the top) is any indication, it'll be time to get a move on with the new generation and their activities. Definitely looking forward to see Kidd & Co. back in action. 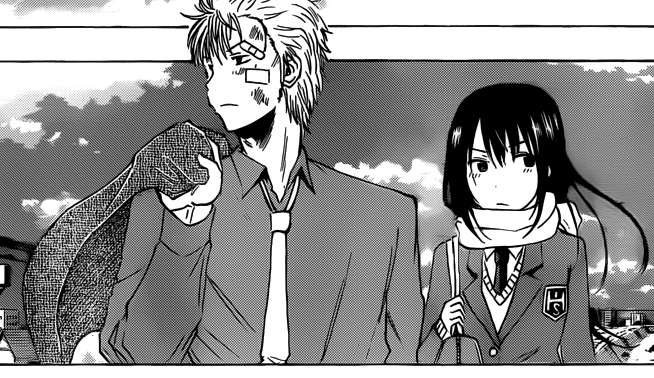 It's as if the fates or Weekly Shonen Jump editorial department have conspired to end the year and start anew in a week or so. I for one like to believe it was the fates that brought about another conclusion - the only one really - for an arc.

At long last, this arc of Beelzebub is over. After a long run of shipping fan service, the arc concludes in a decisive manner right before the new year starts. Gladly seeing off this arc, I bid it adieu and hopefully the next one will go back to the main story.

Predicting that is close to impossible. Just when you think we're back to the main story, another side story pops up out of nowhere. Sometimes it cane be awesome, like the Furuichi arc, and other times it can be a major pain in the ass.

Let's hope for a better arc next time round.

I just can't help but love this chapter. It was hilarious and I love the new character. Bleach also performed well but because it wasn't as epic a chapter as last week, it just missed out on being the best.

To be fair, Naruto wasn't even that bad. Had there not been cheesy dialogue for Neji's death it would have been a much better chapter. It also didn't help that all the other series performed quite well this late in the year.

[important]Double Issues are tricky and so new chapters may be popping up here and there. If this happens, I'll add the review of those chapters below as they appear. Same goes for the next issue review [/important]