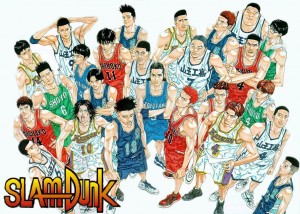 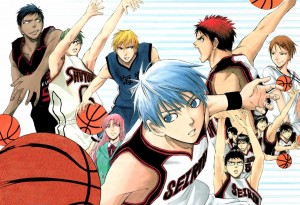 Yeah so one day in the midst of procrastination I decided to see what other manga were running in Weekly Shonen Jump that might interest me - seeing as I already read 5 manga that are currently serialized in Jump, I thought it was a safe bet I might find something interesting. And so I started reading Kuroko no Basket and when I got up-to-date with it I read Slam Dunk. I decided to compare the two in a showdown: Slam Dunk vs Kuroko no Basket.

So which is one is better

A little hard to compare, but I couldn't help myself having read both series. I'm a basketball fan so I can say that both manga were enjoyable, but certain aspects in both can be criticized depending on the readers preference, that's why I'm going to compare the manga based on the storyline, the characters and the illustration.

I personally like Kuroko's story better than Slam Dunk's. For one, it's clear from the get-go who the main antagonists are but most importantly it always nice to have dual protagonists (Kagami and Kuroko) - though Slam Dunk did have a similar feel to it, I found Kuroko's rhytm in terms of progression better and the story's originality to be better.

Slam Dunk's story has been used in almost every single basketball film, so it does kill the tension a bit and in reality there are no set antagonists so one doesn't know who to hate in certain scenarios. The more important reason is that I didn't care so much for the running gags in Slam Dunk; sure Kuroko has one it self but Slam Dunk has too many and they soon become repetitive and dull.

I might be being slightly too biased for Kuroko, since I like the fact that one of the protagonists is short and not powerful (like one of my favourite basketball players Nate Robinson) whereas in Slam Dunk the hero is huge and athletically capable.

The one thing I am sure about is that I like the characters in Kuroko better than in Slam Dunk. For one I couldn't stand Sakuragi (Slam Dunk's hero) at times whereas I almost instantly enjoyed Kuroko and the other protagonist, Kagami; the latter characters love basketball from the beginning but Sakuragi only plays to impress a girl and because he thinks he's a genius at basketball.

Sakuragi get's more likeable as the story progresses but Kuroko's characters are likeable from the start. On top of that, there are not many defining points in Sakuragi's character development, which made reading Slam Dunk a little less enjoyable.

Though being initially taken aback by the character designs in Slam Dunk, all of which were draw like robust 80's gangsters when in fact I'm taller than their descriptions, I was more drawn in by the basketball scenes than in Kuroko. Kuroko, whilst exciting, did not provide me with the same level of excitement and suspense as did Slam Dunk.

The use of many text-less pages in chapters of Slam Dunk made me want to continue onto the next chapter right away. This is not to say that Kuroko is severely lacing the amazing artwork to illustrate the intensity of basketball match but rather it can't really hold a candle when being compared to Slam Dunk.

I don't know which one I would recommend and to be honest I couldn't say that Kuroko is better even though I am finding it more enjoyable. It's even harder to compare since these series have a 18 year gap between their starts and so tastes will differ due to that factor as well.

Best bet - read both and choose for yourself, they're both very good series.

Slam Dunk's anime is pretty dated and I couldn't really get into it, though I remember seeing some episodes as a kid. Kuroko no Basket will be animated and the release is yet to be confirmed; this does excite me and I hope the anime doesn't disappoint!

UPDATE: Kuroko's anime is scheduled for April 2012 (oh yeah!) with Shunsuke Tada (Prince of Tennis) as the director. In the meantime here's a preview for anyone who just needs to see it!