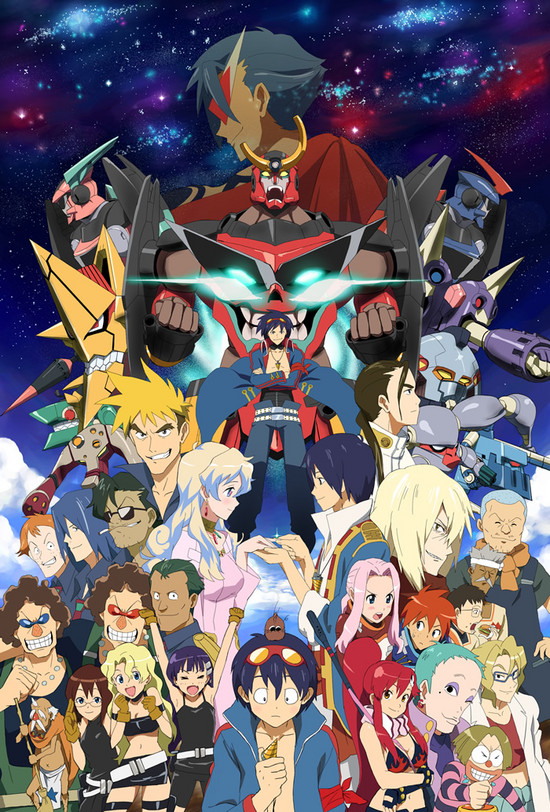 At first sight, one could easily pigeonhole Tenga Toppa Gurren Lagann as yet another addition to the tediously expansive field of mecha anime, a genre riddled with countless anime generic in nature and repetitive to the core. Time and time again is told the tale of the hapless protagonist who unwittingly has the fate of humanity thrust upon his shoulders. True, Gurren Lagann is indeed guilty of using the same old-school tricks fortunately, it stands out above the rest for the bold, likeable characters, fast-paced story-telling and inspiring message, despite the somewhat predictable plot.

Our story commences in a fictional future world, where the majority of the world s human population now lives underground in villages, constantly digging deeper into the earth s crust in search of safety from the earthquakes that endanger the villagers. Our diminutive protagonist Simon makes his entrance into the story, a prominent orphaned digger of the small town of Giha, who one day comes across a strange object, which he later learns is used as the key to a small robot. His best friend and aniki ( brother ) Kamina, often dreams of leaving the village and travelling to the surface, for which he is scorned and looked down upon, for no one believes such a place exists. However, soon Giha is in danger with the appearance of a threat, and Simon and Kamina find themselves armed with little else than the aforementioned robot, christened Lagann, and the unexpected aid of a bikini-clad sniper named Yoko. With the threat eradicated, the three form an unlikely alliance, travelling to the surface of the earth, only to discover it infested with large robots named Gunmen, controlled by the despicable Beastmen. Simon, Kamina and Yoko are plunged into a war against the Beastmen, determined to reverse the fortune of humanity. The story line is essentially 2 arcs with a time leap in between, the details of which I shall omit, because spoilers suck. The cast of Gurren Lagann consists of a crew of engaging, well-developed characters. Front and centre we have the terminally shy and unsure Simon, the central protagonist of the anime. A young bashful orphan with severe self-image issues, he looks up to and cares deeply about Karima, whom he views with love and admiration. As he grows up throughout the series, he draws strength and inspiration his aniki and committing himself to save everyone.

Kamina is essentially the driving force of the story, constantly pushing Simon to realize his full potential. A young idealistic man from Giha, it is his dream that gets them to the surface, and his attitude that brings people together. Although arrogant in nature, he is also charismatic and innately capable of rallying everyone to his side when the need arises. He also wins over Yoko, despite their conflicting personalities and she eventually falls in love with him.

In addition to the main 3, there is a slew of secondary characters who flesh out the story and make it more enjoyable, ranging from gay technician Leeron to the mild-mannered Rossiu. That s one aspect that Gainax managed to get right flawless character development and use. The animation maintains a level of high quality (save a couple of exceptions), with smooth motion, dynamic battle scenes and distinctive mecha design, not to mention vivid colours and a certain level of artistry brought to the whole concept. Tenga Toppa Gurren Lagann, at its core, is a tale of courage, of overcoming obstacles and having the determination to do whatever you want, of maintaining your spirit and never giving up. Neatly summed up in 27 episodes, this epic is highly recommended for anyone looking for a good anime with a good storyline and non-stop adventure.