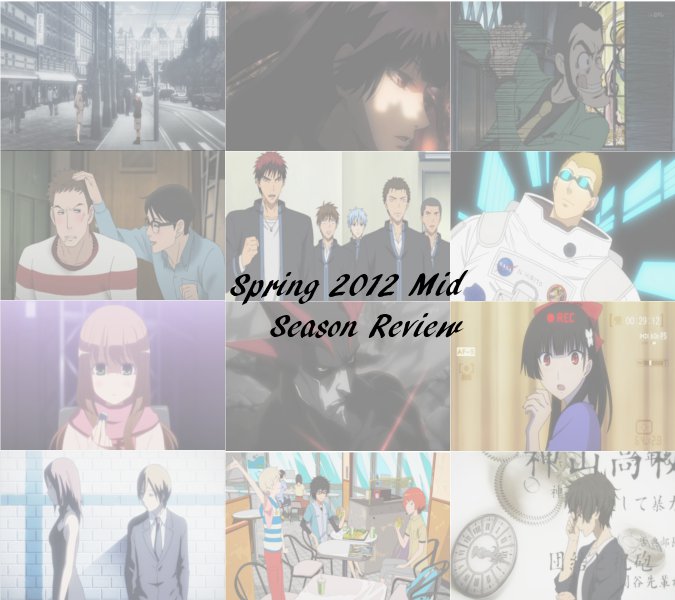 We're approaching the halfway point of the season for almost all of the series and so another post is due, to give an idea of what the best shows you should be watching. Omitted from the post are of course the sequel to Korewa Zombie, Shirokuma Caf and other short anime/any that didn't feature in the spring preview and Fate/zero since I'm still catching up. Besides each anime, I will put how many episodes I have seen in brackets.

This series has done nothing but impress me; going from focusing more on the jazz and slice-of-life to focusing more on the romance has been a great touch. Not only is the direction and music fantastic as expected, but the story itself is very deep and has a lot substance.

5 episodes into the series and I've had no complaints and just interest and anticipation to see how the series will end.

Noitamina have done it! What a great season for them, and Tsuritama is fantastic in it's own way. I don't know why but watching this very chilled and easygoing fantasy slice-of-life has been too much fun and not one that hasn't bored me in the slightest; maybe it has something to do with it being an original work, so I have no idea how it's going to progress or maybe the fact that the cast is just too loveable.

5 episodes in and I'm still wondering how this anime will play out and whether it will take a turn for the serious or not. I've had great fun blogging this series as well.

I feared that many wouldn't get past the first 2-3 episodes of Jormungand and write off the series as being too episodic, something that isn't White Fox's burden to bear seeing that they have been adapting this almost too faithfully. Needless to say that since episode 4, I'm sure any and all of my worries have been erased and even though I know how the story plays out, I'm still patiently waiting for episodes to come out.

All I can say is that I'm happy to be blogging this series for this season.

In a season with 3 fantasy romances revolving around the boy meet's girl premise, Sankarea is the one that does it for me. I don't know whether it's the animation or the overall feel of the anime but the story as a romance is very endearing. I really like how Rea and Chihiro's interactions play out and how innocent the episodes feel when they focus on the two.

Sankarea has proven to be probably the most emotional of the romances I have been following this season and this is what has made it my favourite. It does feel like a very serious and at times disturbing story but it's counterbalanced by the romantic elements and the occasional comedy.

I'll admit that episode 1 did make me feel a little uneasy about the series but since then I have grown to enjoy the series. I didn't really consider the slow start to be due to the series length, but since the second episode the story has gained depth and is becoming more interesting. I like what Hyouka brings to the table so that's why I enjoy watching each episode.

If you don't want to watch it for the story, the insane animation is enough to keep you wowed.

As someone who was following the manga before the anime was even announced I'm very pleased with what Production I.G. has done with this series; faithful to the manga, great soundtrack, smooth animation. The main reason why it made the medium-high priority list is because I know how the story will unfold but if I had to make another complaint, it would be the over-use of the song from the Opening Sequence in the episodes.

I'm still always happy to watch Kurobas on the very day it comes out.

Seeing as I wasn't a Lupin III fan before, I was greatly surprised by how much I fell in love with this series. Everything about it screams old school and the animation and music accompany the story almost too well, whilst the story doesn't shy away from being as seinen as it wants to be. I've said this a few times but this is what I'd expect an anime of James Bond to be; Connery as Bond, no one else.

With that in mind, it's not on the high priority list because the episodes are a bit too episodic which isn't exactly a bad thing but it doesn't really make me as a newcomer to the Lupin III series anxious and impatient to watch the next one.

I love a good astronaut story and Uchuu Kyoudai is certainly just that. Not only does it cover all the fundamentals of decent slice-of-life, it's focus on sibling relationships is really appealing to me. The reason it hasn't made it's way to the high priority list is that I feel it's moving a little too slowly with most of the focus being on Mutta, who will still have to train and become an astronaut.

All in all, still a great series to watch which moves along nicely.

I like that Kimi to Boku is an anime with no particular direction and how it's as close as you can get to the pure slice-of-life but this season has had a little too much focus on romance for me, especially too much focus on Chizuru's romance.

I will say that I enjoy how they worked in a few characters who I wasn't expecting and have explored the main cast a little more but if they do continue to focus on romance, I would like to see a little bit more from Kaname's and less from Chizuru's. I realise I may have dumped on Chizuru a little too much, since he didn't get much screen time last season but he's got too much focus this season.

I know I'm blogging this series but there's just something off about Zetman. The pace is too fast and at times it does feel like when your moving from episode to episode, we're missing some rather crucial developments that haven't been explored well enough.

Even with those flaws, it's still an anime that has got me interested and I don't regret choosing to blog it. It's a hard task to compress a long running manga into just a 13 episode season but TMS has been doing an admirable job if I may say so.

Saki has become somewhat of a guilty pleasure of mine, something I wouldn't really be watching if I didn't know and play mahjong. For that reason I could understand why not many people would watch this if they haven't watched the "not really" prequel since it doesn't explain much at all and assumes quite a bit of understanding in regards to mahjong to get what's going on.

It hasn't really been the most exciting anime this season and even at times I wonder why I watch it (hence it being a low priority anime) but it has been quite fun and it's focus on relationships and mahjong is done rather well. The pacing is a little fast but it's not something to fret about.

I don't know if it's the Shaft-like directing resembling a toned down Bakemonogatari, the mash-up of genres or the story itself but this series hasn't really been that outstanding for me. I don't find a mix of genres to be a bad thing but I do feel like it's trying to hard to mix comedy, romance and mystery together and the story without the romance would be a less interesting Hyouka. The romance itself doesn't sit 100% well with me since it's not really cute or endearing but it does remind me a little of the romance in Bakemonogatari, which if anything was a little unique and fun.

As a whole the series isn't bad by any means but it doesn't really do that much for me like the many others in the higher priority lists. The animation is beautiful and is the appropriate rival of Hyouka, so if your into looks you might want to check it out.

I'm a little behind with this series and I haven't been that impressed with it but the story does seem to improve with each episode and whilst it does still make me a little uneasy everytime Urabe makes Tsubaki lick her drool, it does remain as quite an endearing romantic comedy. I still find it a little hard to watch an episode of the series but I think it might be dependent of my mood.

I'm a little surprised that out of the 3 fantasy romances this season, Nazo no Kanojo X has had the least amount of fan service.

A list of the other anime that currently running and their status:

4. Acchi Kocchi - Dropped (3/ ) - While I can understand why some may like this series, it was a little too cutesy for me.

5. Haiyore! Nyaruko-san - Dropped (3/ ) - After giving the series a 3 episodes trial period, I dropped it's parodying ass like it's hot.

6. Natsuiro Kiseki - Dropped (2/12) - I gave it a chance after the 1st episode but it still couldn't compete with Kimi to Boku or Tsuritama.