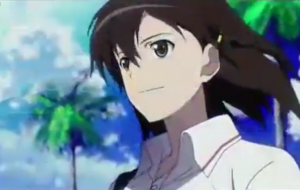 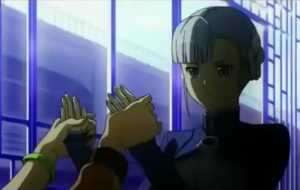 So first episode of a new series is out, right in time for a hungover me to watch and review. Rinne no Lagrange has also been picked up by Viz Media in the states to be streamed as the episodes air in Japan - quite a bold move which gave me high expectations for the show, though this might be a case of hubris and not an indicator of quality.

So the first episode almost immediately starts off with a little bit of fan service; namely Madoka, the heroine of the series, drops her skirt and takes off her top to reveal a bathing suit. An annoying start to the episode since they seemed to use this method as an excuse to introduce the main character and demonstrate her personality right from the start but since it wasn't exactly the most obvious and perverted use of fan service it didn't irritate me.

The episode itself wasn't anything special. The story was kind of dull and the main character wasn't great - a girl who essentially does everything to help everyone and anyone isn't really the most interesting of characters. Ignoring the main character, the alien character Lan and Madoka's sister aren't particularly noteworthy either since neither of them come across as likeable.

Even towards the end of the episode when the first fight ensued between Madoka and another set of male aliens, I wasn't even remotely impressed with a number of things like:

1. The introduction of Madoka's possible link with her mecha (just didn't feel natural)

2. The fight between the mecha (messed up by the music and was generally slow)

3. The sister's involvement in the story (way too clich d).

Not a good start to the series, but since it's the first episode I won't seal its fate until having watched at least the next episode.