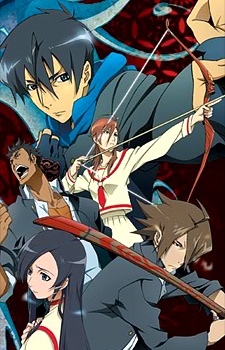 This season of the Tokyo Majin Gakuen Kenpucho: Tou is the first, there is one more season after this and that is the end of the anime. This season consists of 14 episodes, and the next season consists of 12 episodes. This review focuses on the first season. The two seasons are not separate, the second season is a continuation of the story since it does not finish in the first season.

The anime starts of initially in a very horror-style way and is very graphic. The battle scenes are high quality at the beginning. The anime pulls you in at the start. The first two episodes are somewhat confusing, but the story does develop and you grow to like the characters as the anime progresses.

The music is decent, but not great.

The artistry of the anime is very good, the characters emotions are conveyed wonderfully through the artistry. Also throughout the anime the artistry was maintained, and there was a good number of battles in the and they were shown very clearly and high in quality.

I very much enjoyed the anime, and will continue onto the second season. It was better in my opinion compared to Nabari no Ou and Chaos Head, although not as good as Bleach (at times).