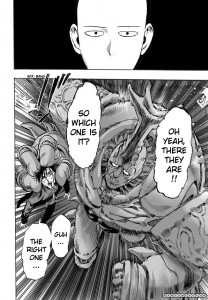 I recently started reading Onepunch Man and at first I wasn't really sucked into the manga but as time went it got more and more interesting and towards the 10th chapter I think I have to say it's pretty good. The first chapter starts with a mysterious being resembling a Namek (if you've seen Dragon Ball Z you'd understand).

The world Onepunch Man lives in has super villains and his goal is to defeat them all and eradicate evil. However after his three whole years of 100 push-ups, 100 sit-ups, etc... he lost his hair and got super strength where he can defeat an enemy if he lands one punch.

The main thing about Onepunch Man is the over the top battles which take Shonen to the next level, he literally defeats his enemies with one punch! The story really starts to pick up toward chapter 10 as he picks up a Cyborg disciple Genos, well more like Genos forces him and tags along. I began liking the way that the main story is picking up now and it isn't exactly a stand alone chapter by chapter series.

The Onepunch Man manga series is more of a light hearted relaxed, unusual hero type of series. I find it not very intense, with tones of comedy and generally seems more like a parody of the Shonen genre. After seeing so many Shonen's like Bleach and Naruto where the character will eventually train up and get strong enough to defeat the enemy, it is interesting and enjoyable to see a series which cuts out all the training and goes straight to the punch literally in one punch!

I am definitely picking up this anime! I will be doing 10 chapter reviews until I catch up to the latest chapter then I will do it chapter by chapter. So stay tuned for more Onepunch-Man madness!