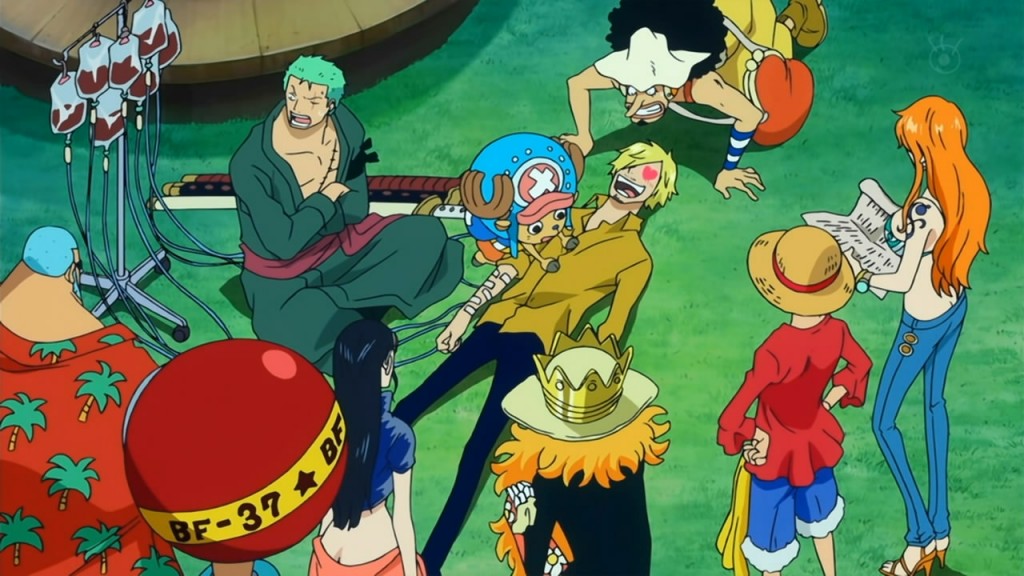 Caribou is getting his men to bury the Straw Hat Pirate imposters, and then leaves in search of Luffy and his crew. There is a flash black showing Rayleigh remembering when he first met Roger, and Roger was wearing the Straw Hat back then and acted pretty similarly to Luffy. Returning from the flashback, the Sunny Go has submerged and is going deeper into the ocean. Nami then explains how the coating works, and says if there are too many holes in the coating then it will burst and the water will enter. It is also revealed by Franky that Kuma (after Hatchan was hurt) protected the Sunny Go from the Marines, and he left once he met Franky. Caribou meanwhile has been tailing the Straw Hats, and is about to launch an attack on them.

It's interesting to see that the Straw Hat was originally Rogers, and the anime seems to be showing a lot of similarities between Roger and Luffy. They are making Luffy look more and more like the future pirate king, especially when Rayleigh cries and it looks like his nostalgic as if he is seeing his former captain Gol D Roger again. But one thing that struck me was Shanks had the Straw Hat after Roger, if we think of the Straw Hat as a sort of symbol of who is the next pirate king maybe Shanks was Roger's prodigy But Shanks passed it down to Luffy, who is now well on his path on to becoming the next pirate king.

I also found the coating pretty interesting as it seems like a semi-porous membrane, which allows certain things in and out but not too much and if overloaded it breaks down.

Kuma's really saved the lives of the Straw Hats by sending them to random locations way back at the battle on Sabaody Archipelago. He even went further by protecting their ship to ensure they could venture further on their journey by getting Vegapunk to program the protection program before he looses his will and became completely robotic. Luffy's father doesn't really seem like someone who looks out for his kid, it's more like Garp does that; so maybe Luffy plays a major part in what the Revolutionaries are planning to do. We also haven't seen what Nico has learned from Luffy's father