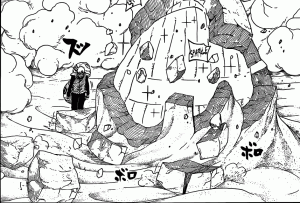 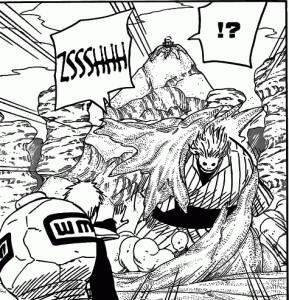 So last week we ended with the introduction of the Second Mizukage's most dangerous move yet - "Mugen Bakuha Ninjutsu" or otherwise known as the infinite explosions technique and this left all of us intrigued as to what this could be. Lucky for us all is revealed in this chapter!

First an explanation as to what the technique really is. Evidently it involves creating a water clone that is surrounded by oil and according to Oonoki this makes changing it's temperature a very simple task; that means as the oil heats up, water vapour causes it to explode and the consequent hail cools it back down to it's original form so it can keep exploding. Now that is a terrifying technique and one worthy of it's name! And after Oonoki's explanation of it, the allied forces start searching for the Mizukage's real body whilst Gaara attempts to take out the clone.

As the clone seems to be hard to stop because of it's surprising speed, Gaara decides to seal off the Mizukage but unfortunately just as the seals are being placed the clone returns to rip them off. Matters aren't helped by the fact that the Mizukage refuses to divulge the necessary information to stop the clone as he sees it as a favour to allied forces because and I quote, "If you can't defeat me, how do you hope to defeat the boss." And with those words being spoken his clone explodes.

No casualties are taken though because Gaara uses his sand to protect all the ninja and is now taking the clone on himself! And after a using a sand clone, he manages to avoid the attack and envelops the clone in his sand covering another explosion but this time there's a twist to it! He's hidden his father's gold dust in his sand and because of the heat melts down the gold in order to weigh down the clone, cutting off all movement because the hail cooled down the gold.

In the end the Mizukage was strangely happy about losing and even goes as far as calling Gaara a "Golden Egg" (a terrible pun considering the situation).

So this brings an end to the battle with the resurrected Kage's and reveals even more amazing ninjutsu. Now we have the other battles to look forward to! Maybe we'll return to see the conclusion of the Swordsmen battle or we'll progress straight to the battle against the "new" Six Paths of Pain; I'm definitely excited since the Shinobi war saga has proven to be the most entertaining of all saga's mainly due to the display of other village's power and not just the Hidden Leaf's.