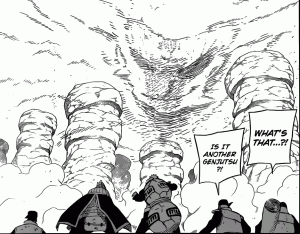 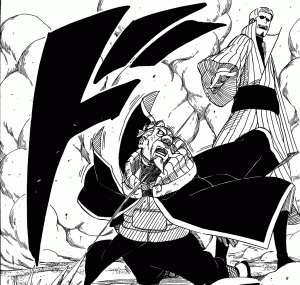 After Naruto finally takes down the almost invincible Third Raikage, our attention now turns to the takedown of the last resurrected kage; the Second Mizukage, who has seemingly avoided being hit from the beginning because of the illusion created by summoned clam.

The chapter starts of with Gaara defending against the Mizukage's water, which he comments to be more like oil and in the background we see Oonoki trying to blast away the distracted Mizukage with his devastating Jinton no Jutsu.

However, Oonoki's runs out of chakra and stamina and is forced to resort to his Earth style Rock Fist (still quite an impressive technique). Crashing down on the Mizukage's clam he is unable to make the slightest dent, but after a snide remark from the Mizukage he changes to his heaviest technique (Doton - Chou Kajuugan no Justu) which splits the lam in half and hurt's Oonoki's back in the process.

As soon as the illusion is cancelled, Gaara is using his third eye to scout the area once more whilst a helpless Oonoki is lectured by the Second Mizukage and prepares to take him out with the H zuki clan's special technique: - That's right! The Mizukage is from the same bloodline as Suigetsu and his brother Mangetsu.

The Mizukage fire's the technique thinking the deed is done, but just as that happens Gaara reveals the sand replacement and ambushes the mizukage while he still can and reveals that his third eye has been watching over Oonoki for the whole time. The Mizukage fights the sand to his best efforts until Gaara brings out Sabaku Soutaisou (Desert Tiered Imperial Funeral) which takes shape of a pyramid and then is proceeded to be sealed off.

Just as the forces are ready to proclaim victory, the pyramid explodes! Then we see the Mizukage's enlarged face forming in the sky. How is this possible Genjutsu No rather Mugen Bakuha Ninjutsu (Infinite Explosions Technique) that was apparently developed by Muu's (the Second Tsuchikage) ancestors!

So how on earth has the Mizukage mastered something that the previous Tsuchikage's ancestors had developed I sure want to find out and it seems with every chapter that's released we are able to see all the ninja from different countries displaying a shared bloodline going back to the Sage of the Six Paths. We have already seen ninja from the Hidden Stone, Hidden Mist and Hidden Cloud villages who are able to use the Yoton aka Lava release (with some minor adjustments in the way the lava forms), so maybe there was a time when techniques were shared more freely between clans or maybe clan's used to be bigger and then were split down the middle by conflict. Still with one revived Kage left, the manga should soon return to the fight between the Allied Forces and The Seven Swordsmen of the Mist (+ others) and maybe finally turn it's attention to Madara and his new paths of Pain!