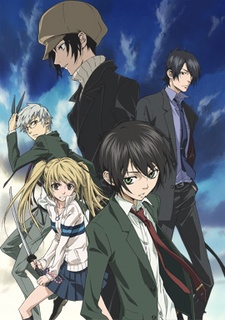 Nabari no Oh is a decent anime, something you can watch. It is rated PG-13, but does have some violence and bloody scenes in it. If you're looking for something action packed, this is not the anime you want to watch.

Th anime starts of way too similar in storyline to Naruto. I got the feeling of Naruto, Sakura and Sasuke in the anime at the beginning, there was even someone like Itachi. Then comes in one villian and it all changes, the story becomes more story telling than the action you expected at the start.

The animation of the anime is different to normal animes, the characters are however very similar to the generic animes but the background was more painting-like which at first was difficult to get used to but I did get used to it. The use of sound isn t top-notch, but hey it's not bad either, its average in quality.

Now if you're looking for a Ninja anime, this isn t really a Ninja anime (well it is but ). The anime is different from the normal Ninja animes out there, the main difference is the growth of the characters and the concentration on dialogue and storyline than flashy battles. But there are a few flashy battles to please the audience.

All in all, it was good. Not great, but good. Contrary to popular opinion, it is not a rip-off of Naruto, it starts off looking that way but it goes a direction Naruto never took and cannot take.