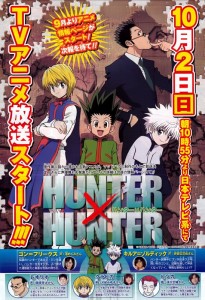 If you've been a fan of the original Hunter x Hunter you will be happy to hear that they anime will be continued, actually to be re-animated and hopefully continued past where it originally stopped in the original anime.

The original Hunter x Hunter was 62 episodes long followed by a series of OVAs which amounted to 30 episodes, and ran from 16th October 1999 to 18th August 2004. This was partly due to the irregular release schedule of the manga and the many times the manga went into hiatus. The manga has performed well selling over 55 million copies as of August 2011. The anime itself was more successful than the manga. Because of its previous success they are rebooting the anime.

Madhouse Studios will produce the anime, with Hiroshi Koujina directing the series. The series is set to hit TV screens in Japan on the 2nd of October 2011.

However it's not known whether the anime will continue past or even as far as the original, but hopefully it will continue and finish when the manga is complete.