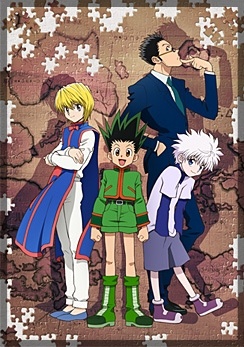 The episode begins with Whale Island and Gon catching a Lord fish to be allowed to participate in the Hunter exam. His father Ging was a hunter and captured the same fish when he was 12. Ging abandoned Gon to be a hunter, and Gon wants to find out what is so great about being a hunter that you would abandon your own son. He then sets of on a ship where he claims he will be the Best Hunter one day. Then he notices there is a storm heading towards the ship. The captain then navigates through the storm, and rounds up 3 of the hunter wannabes which are Gon, Kurapika and Leorio. He asks them why they want to be hunters and a fight breaks out between Kurapika and Leorio. Then the fights is stopped by one of the sailors nearly falling overboard and Gon saves him by jumping overboard and Kurapika and Leorio grab Gon. The captain then tells them that they all pass.

Sintaku's view: Having seen the original, but a long time ago this remake felt pretty different. Granted it is being made by a different company. Hunter x Hunter seems to be geared for a younger audience. The animation was different to the original, it seemed a lot more colourful and brighter.

I will keep watching as I hope it will pick up, maybe it will end up being a good remake but it is too early in the series to tell now.

azeriraz's view: I have not seen the original anime or read the manga so I found the idea pretty interesting. It`s always hard to draw in a huge audience with just the first episode but it was a nice first episode. I'm going to give it a few weeks before passing any more judgement.