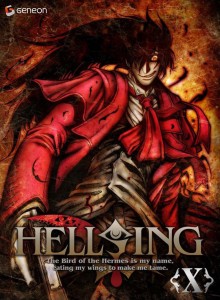 Hellsing Ultimate started over 6 years ago, and finished late in December 2012. The quality of the battles and the sound was impeccable. However I felt it was just not up to expectation, the last 9 episodes built up to an epic finale. But I felt the finale with somewhat slow and left a sense of something missing.

I have to wonder why this is the case, I normally would think that a series (OVA actually) such as Hellsing Ultimate would have been finished in a spectacular finale. Don't get me wrong I did thoroughly enjoy the finale, just not to the standard that it was hyped up.

The death of Alucard just seemed lacking, I didn't see my jaw drop as I expected and things just seemed to have a low-key ending. And Alucard's return was something anyone could see coming to be completely honest. Although I do have to admit I thoroughly enjoyed the whole series.

I found the way the Major died was just dull, he was a robot? So this whole war was a robot versus a vampire? It does explain his craziness but aren't men more crazy than machines? Also the Major never actually met Alucard in the end, has he ever actually battled him face to face at any point in time?

The war seems more like a battle of ideals, one army versus another and it seemed like the army opposing Hellsing was just seeking a true death on the battlefield. Alucard seemed a lot like the Grim Reaper and the Major's men seemed to be the poor souls going to their death, but it seems like they were waiting for an opportunity to die at the hands of Alucard (or people connected to him). I was pretty saddened by the way Walter perished, he was only against Alucard and he still respected Integra Hellsing even to the end. He was indeed an interesting character.

I personally felt the series began amazingly and ended on a duller note but it was definitely a great watch!