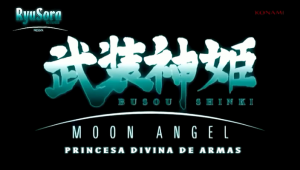 So after hours of slaving away with Sintaku on our Fall Preview article, I couldn't help but subconsciously consider which new anime I might be interested in possibly picking up. After reading about and previewing the 20+ being released (many of which made me laugh), I thought to myself this one could have some potential.

I dug around a bit and discovered that shinki figurines are quite a big hit in Japan and that Konami even went ahead with an MMORPG, where players get a unique code and go online to battle it out using their shinki. Initially I thought this was just another way to promote the game product much like Pokemon, Digimon or Bakugan and honestly was a little sceptical about the plot's potential. Would it be just like all the others Or could it have something more

Then I finally sat down and proceeded to watch the first episode. The episode starts off with a nicely animated fight between two shinki: Starf Mk.2 and Arnval Mk.2 and ends with Starf seriously injuring Arnval at which point Arnval proceeds to escape whilst losing all of its fighting gear and ending up on top of a moving lorry. We then change focus to a young boy walking on his own and being passed by a group friends on their way to the shinki store. The boy (Tsubasa) eagerly asks if he can join the group and gets no answer other than the fact that he's a transfer. He goes along to the store on his own, where through an inner monologue he reveals to us his desire to become a shinki master and then gets going home whilst at the same time Arnval is picked off the street and dropped off in a tree right outside Tsubasa's house by a bird. The episode ends with Tsubasa discovering Arnval and Starf getting orders from it's master to retrieve the shinki that has "disobeyed" them.

In short it reminded me of a gaming version of Tengen Toppa Gurren Lagann minus the apocalyptic backdrop of the story, not implying that it could not have a darker and more interesting story than the previously mentioned anime's but more-so the the use of mecha to battle and the young boy Tsubasa's dream and loneliness.

My main concern for the series is length of the episode; standing at just over 5 minutes. If the series continues in such a manner it could either work or be a complete flop but as I said before, the plot if well written could turn this into a worthwhile anime.

I'll still have to watch the second or maybe even third episode(s) to definitively decide whether to pick up the series.