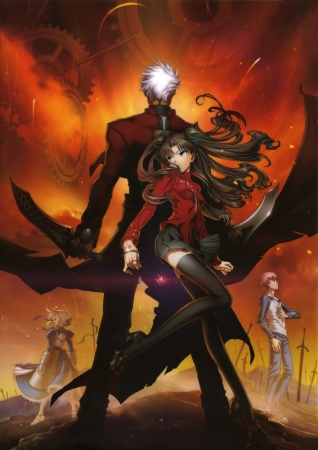 The story felt somewhat hastened, there were parts where things happened rapidly and parts where things were going slowly. The movie wasn't exactly something that was designed perfectly for standalone watching, you must have seen Fate/stay night to understand a lot more about this movie. Basically the parts that overlapped were covered by the movie in great haste, so as not to have too much old footage being reused. The story was interesting, it gave us more background on the protagonist than the Fate/stay night path had done. There wasn't too much character development, but there was a lot of action. The story mainly focuses on the three main characters, and doesn't really involve the other characters to a great extent unlike the Fate/stay night path.

The animation was beautiful and clear, although for some fight scenes they seemed to want to skip animating the fight scene and would describe it to some extent. The animation was in high-definition, and you could see a lot of effort was put into the characters and buildings.

The soundtrack complimented the animation pretty well. It enhanced the viewing pleasure of the audience.

The movie covered a different path to the anime, and combined with watching the anime it covered a lot of the missing holes in the anime. A lot more was understood about the main protagonist. It was definitely an enjoyable watch. I would recommend watching this and the anime then watch the prequel Fate/zero.