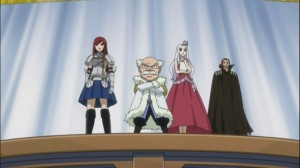 Following in Fairy Tail fashion, this episode wastes no time in completely shifting the focus from Lisanna's return to the guild, to a very interesting upcoming arc; the S Class Advancement Exam! This is definitely something to look forward to, especially with some awkward and very comedic match ups for the exam. In particular I would love to see Elfman and Evergreen in action but let's not overlook : Gajeel and Levy, Gray and Loke (AKA Leo if you forgot who he was), Juvia and Lisanna.

A few things did stand out during the episodes and will be on a lot of your guys minds (or rather should be). First of all what is Cana hiding and why does she have to become an S Class mage so badly Who is the mysterious man that keeps appearing (now in Charle's premonition) and the question that was on my mind the first time I saw the episode: who on earth is Mest I mean someone who has the potential to become S Class has suddenly appeared out of nowhere and claims to be Mystogan's apprentice is definitely suspicious.

I do applaud the series for taking time to reveal more information about Cana, but that's to be expected from Fairy Tail as we have already seen episodes exploring the other characters in more depth (but not for too long) which in my opinion is great way to branch out and give us fans the more desired information without making it an arc about the characters.

To wrap up, I hope all you others who watch Fairy Tail are excited about this upcoming arc. By the looks of it we should have an arc filled with action from the get go, what with the premonition of what looks to be the destruction of Tenro Island and a very mysterious man.