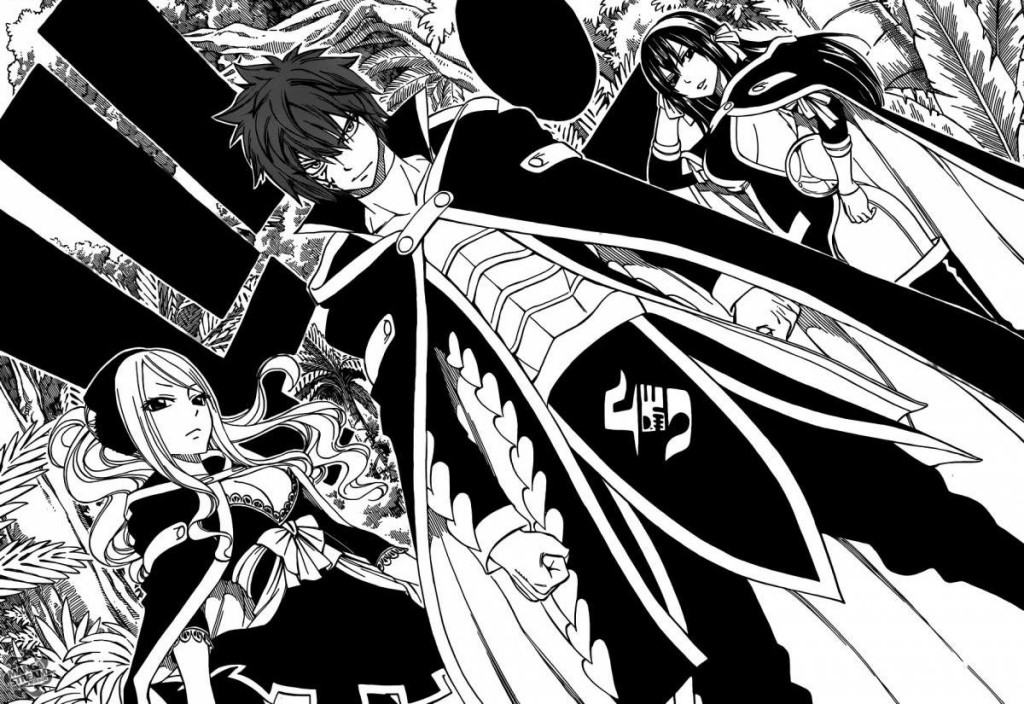 So last week we witnessed a more standalone type story from Fairy Tail with more emphasis being put on comedy than the actual progression of the storyline. In the end the main guild members had not been able to train for 3 months and have hence been left in their current state. So the question which arose was: how are they actually meant to participate in the tournament Let's explore this week's chapter for some answers.

Another chapter in the lead up to the magic tournament and one that brings back a few familiar faces. Not exactly action-packed or fast paced, but that's to be expected when your building up to a tournament full of the most powerful mages.

So the chapter starts off with all the respective guilds making arrangements for the great magical tournament. So the likes of Lamia Scale, Blue Pegasus, Sabertooth and even a guild which we've only heard by name up until this point - Raven Tail (Makarov's son's guild).

Then focus shifts back to Natsu and the gang who have just unknowingly squandered their 3 months of training by spending one day in the celestial world. Needless to say the gang is very upset and have no idea what to do, until they receive a letter with instructions for a rendezvous. Anyone fathom a guess at who has set up this meeting Just Gerard - you know the one who was planning to kill Erza and Natsu way back in the beginning of the manga.

Accompanying Gerard are Ultear and Meredy, the latter who I myself didn't recognize at first has grown up! But that's not all. Apparently these 3 have formed an independent guild by the name of Crime Sorciere (not hugely impressed with Hiro Mashima's creativity here, but what you gonna do ), and as the name might suggest they now focus on destroying dark guilds.

With the touching reunion over, it's time for redemption and this time it comes in the form of a power-up! How Ultear's arc of time magic can apparently enhance the potential of each of the gang's magical containers. As you might expect everyone is pleased by the news, well.........not Erza.

Well not a GREAT chapter, but not bad at all. Mashima does love using the themes of redemption an second chances so the chapter itself didn't bring with it that many surprises but it at least did solve the problem of the gang being too weak to participate in the tournament.

The chapter as a lead up was generally solid but it did move at an almost turtle-like pace and that's what is frustrating with Fairy Tail, especially since Mashima completely pulled one out the bag when he had us guessing whether or not the main characters had been killed off.

That being said, I cannot wait for the tournament to start and for us to finally find out more about the new mages i.e. Rogue and Sting the dragon slayers and of course Raven Tail!