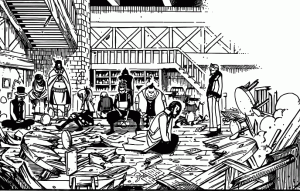 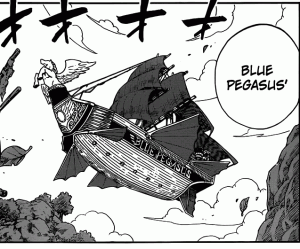 Sorry for missing out some usual reviews (of the other big 4) but now I've found time and what lucky timing I have! So last week the chapter ended with just a boy staring out to sea, right after the obliteration of the guild and this week some of our answers are finally answered!

So the boy is in fact Romeo (lucky guess on my part) and the Fairy Tail guild still exists but is now in run-down tavern on some hill close to magnolia. Seven years since the incident of Acnowlogia, we are re-introduced to all the members of the guild who have changed physically in one shape or form i.e. Reedus has lost all his weight, Droy has become overweight and various others have got new looks.

It is then revealed to us that the guild (now under Macao as it's master) is struggling and has been forced out of Magnolia in fact they have now been replaced by a new guild called Twilight Ogre and this guild is owed money by Fairy Tail. So after a display of weakness everyone is reminded of the tragedy when some of Reedus' drawings of the old guild are put into full view.

As the chapter is wrapped up, Blue Pegasus makes an appearance telling the guild that Tenroujima wasn't actually destroyed!

As usual it was a good chapter, a little slow and possibly the events unfolded could have been expected but it's still keeping us on edge for the next chapter and this is what's great about Fairy Tail! And now the biggest question is: what has happened to Tenroujima and all the guild members that were on it My guess is that it's survival had something to do with that girl we say for a few frames in the previous chapter but the manner as to how is still a mystery. I doubt Hiro Mashima would be satisfied with using the same idea that he used to explain Lisanna's dissapearance, so let's expect a more interesting development in the plot.