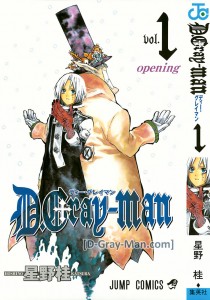 Okay so here's the story - having felt quite guilty about never having paid for manga coupled with a few Amazon vouchers lying around, I decided it was time to purchase my first manga volume. I didn't want to go for something I had already read so I decided to buy volume 1 of D.Gray-Man. Why A few reasons:

1. It's still ongoing (even though it was moved from Weekly Shonen Jump to Jump SQ)

2. I've heard great things about it

3. It's still one of the best selling manga in Japan, so it couldn't have been bad

So the story is one about exorcists with the main protagonist being a 15 year old English boy by the name of Allen Walker. Allen has been raised to be an exorcist by a general of the Black Order - an organization accredited by the Vatican in order to destroy the demons (akuma) created by the main antagonist Millennium Earl.In this world exorcists gain their unique fighting ability through a substance called the "Innocence," something that is explained in a great deal of depth in the first volume.

So in the first volume Allen has arrived in England and is headed towards the Black Orders headquarters. Having been forced to take a couple of detours along the way, he finally reaches the headquarters only to be attacked by another exorcist when a machine fails to identify him as a human (explained in the manga) and then when all the misunderstandings are cleared up he is surprised by an extremely unorthodox inspection.

I'm glad this was the first volume I bought! I know that there are quite a few manga's, anime's and not to mention western films about exorcists, but D.Gray-Man's first volume just draws you into the story and makes you want to continue.

The artwork is great and fits the style of the story perfectly, but more-so the characters are very likeable as well; you just want to find out more about their history. A refreshing turn breakaway from the norm since we weren't introduced to any allies until the last chapter of the volume.

I can definitely see why this is a very popular manga in Japan and am thankful that the several hiatuses haven't affected the manga's popularity. Even though Blue Exorcist is running in the same magazine and still seems to be the more popular choice nowadays, I wouldn't put D.Gray-Man into the corner or compare it to Blue Exorcist because both of these stories hold individual merit.