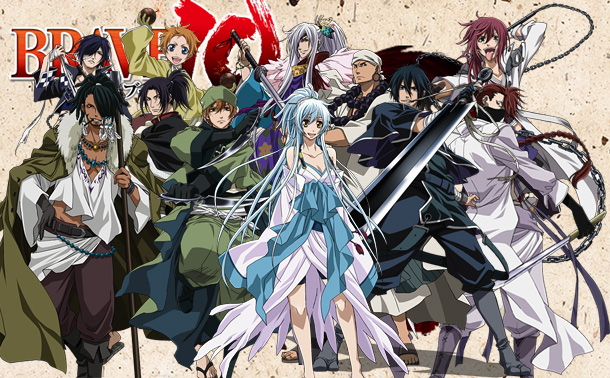 Having blogged this series episodically and after a suggestion that I should review this series as a whole, I figured I'd give it a shot. I might also start doing this for a lot of the anime that come out seasonally, since I won't be able to blog more than 2 or 3 shows per season (even 3 is kind of a stretch). I figured the best way to conduct these reviews would be to look at the animation, characters, story and sound (not necessarily in that order).

Let's start with the story

If you watched Brave10 with expectation that the show would end up being deep or something different then I feel sorry for you. There's not much you can do with the anime when the source material you are adapting it from is a historical seinen manga, it also doesn't help that the series has only been given 12 episodes and no guaranteed season 2 before the start of the series - silly rabbit!

That might have been the reason the series ended up with no reliable trend of continuity. Each episode could essentially have worked as a standalone, that's to say that if the most of the episodes (from 2 till 10) were re-organised in a random order, there might have been absolutely no difference in the viewing experience. When I think about it, I wasn't particularly disappointed by this fact but it did make the show's attempt to follow some type of plot rather dull and since we already knew that they had to introduce 10 characters for the feudal lord to recruit it became even more bothersome when you were waiting for the final episodes and wondered what type of battle finale was to be shown as the last episode(s).

The final episodes were the worst part of the entire series. Lack of episodes reduced even more by unnecessary "gag" episodes led us to a finale of 3 episodes: 2 of these episodes showed the Braves struggling which would have been fine had there been more intensity in their fights, however I didn't get a single ounce of intensity from these two episodes nor did I enjoy the fights, mainly because the fights at this point had become even more boring than the predictable plot, devalued further by constantly focusing on Saizo's fight against Hanzo. The conclusion was worse: Saizo doesn't even push himself to the limit to beat Hanzo since Hanzo ends up being swallowed by the kushimitama and the other characters who were being beaten down like nothing was happening suddenly get up and decide to somehow beat their opponents in one go, with one of the fights not even being concluded. Probably the only real proof that this wasn't meant to be a shonen series. 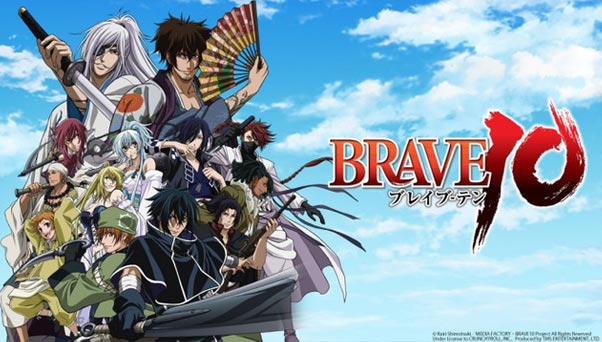 The music was fine as well. The music during the fight scenes were good at making the battles more exciting and the music during the everyday and comedy scenes tended to be pleasant on the ears whilst maintaining a certain eastern feel to it, which I'd consider to be a nice touch. It was a good mix of traditional oriental sounding music and the outbursts of rock music to aid in the excitement of the fight scenes.

Probably the best part about the anime. Each one is funny on their own but their relationships within the group are what bring about the comedy in the scenes; since they are a bunch of warriors collected by the care-free Yukimura, their personalities are all over the place. Of course as with a lot of anime, there is one gender-bender, a kid, the "honourable" type and an older sibling (to name a few) and as overused as these stereotypical characters may seem they did make the series a lot of fun to watch.

Since there was a character being introduced on an episodic basis, I wasn't expecting any character development from the beginning and again I wasn't disappointed since any type of character development coming from a 12 episode action anime series would have probably made things worse; I don't want to get emotionally invested in these characters! Even more-so because this isn't a long-running shonen action series, in which case I would gladly get emotionally invested in the characters.

The question that just needs to be answered: was Brave10 good

Well I liked it. Probably because it was such a carefree series that you can go back and watch any time without having to watch every single episode to enjoy it to it's fullest, however whether you will remember the series is a whole other issue. Without having this series on MyAnimeList, I don't think I would have an easy time remembering it were I asked to sit down and list all the anime I have seen. Simply put the anime isn't particularly memorable nor did it really stand out and make me say wow; shows that have done include [C]: The Money of Soul and Possibility Control, Tengen Toppa Gurren-Lagann and Cowboy Bebop. Yes I do realise that those shows all happened to be original works but Brave10 could have easily been better. Granted the series had to follow the manga it was being adapted from to a certain extent but it failed to do it well, so I'd say more episodes could have been the answer, a more concrete ending or less focus on the 10 characters gathering and more on the action/adventure side of anime.

Unfortunately, Brave10 failed to follow in the footsteps of the very successful Sengoku Basara but should still be watched for the humour and action by fans of the genre.