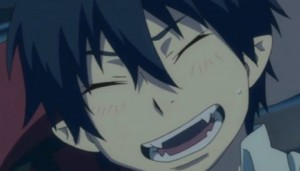 Konekomaru gives into his fears and let's a demon take control of him, and in the process he tries to kill Rin. But Rin saves Konekomaru and gains his trust. There is also a touching speech of Rin's when he meets Konekomaru who is planning on quitting the Exorcist course and returning home because he is too scared. In the end Konekomaru stays with the group, and looks like Rin and Komekomaru are now friends. But the relationship between Rin and Suguru is a bit rocky, they seem to end up in some physical fight even now.

Although something that might be looked into in further episodes is this artificial human research lab which they found which was linked to the breach in the barrier. Apparently they have been banned for over 300 years by the Vatican, and this one was active within the ban. Who could it be I have my suspicions on Mephisto, he's the guy who watched his brother get killed before his eyes and also has been working for the Vatican for 200 years even though he is a demon. Why did he betray his people and why did he betray his brother I wonder.