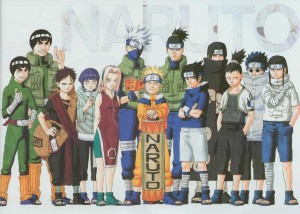 NOTE: If you don't read the manga for either one of these series then you should probably avoid reading this article as it may contain some spoiler material pertaining to future anime releases! Most of what's contained within this article is my own speculation and not facts, so I won't apologise for any inaccuracies at this time but will write another article when more information is available on the projected finish of these manga's.

So about a year ago when the Arrancar arc had ended in the manga, I stumbled upon a comment somewhere on the internet that said Tite Kubo will draw two more arcs taking him approximately between 3-4 years and then more recently with the advancement of the Naruto manga I have a had a growing hunch that it too will not not last for any more than 5 years (I'm estimating a minimum of 30 chapters a year).

So if for the sake of this article, let's assume that Bleach has 2 more years left and Naruto around about 3. What will happen to WSJ losing two of it's most popular manga's

First of all I want to say why I think the manga is reaching it's end. For Bleach I'm basing this off the fact that there isn't much left to add to the story line and because of what I mentioned at the beginning of the article. With Naruto, the end is fast approaching as we are now at war and Sasuke and Naruto have essentially come to the apex of their respective power developments - the most we can expect is a dragged out fight between Sasuke and Naruto. So what could WSJ do in order to fill the gap that will be created if these two manga's end

Well first and foremost they could always turn to the mangaka who brought us these two massive hits and see if they would be willing to come up with a new idea for a manga. This is definitely a possibility as last year Masashi Kishimoto published a one-shot baseball manga called Bench! which in my opinion shows definite promise, but whether it can succeed is up to the Japanese population whilst we have no way of knowing whether Kubo would be interested in doing another project. Even if they were to agree, could they pull out something as good There's no way of knowing this because both of these men were in their early 20's and now Bleach has been Kubo's focus for 10 years and Kishimoto has been working on Naruto for the past 12.

So what can we expect A fresh off the street mangaka with a great idea or is Hunter x Hunter going to make up for it's lost momentum Either way we're looking at WSJ filling 2 gaping holes in the upcoming years and that could mean even higher rating for it's already most popular manga; One Piece!

Of course there is a huge probability that I'm completely wrong about the timing, especially since Kubo's time estimate has already been surpassed by 2 months and he hasn't even finished off the current arc and is probably unlikely to do so until the new year, which could mean an extra few months or even more to finish his final arc before deciding his next move.

Just to clarify, I didn't write this because I actually want these mangas to end! I just realise that they haven't got long left and that in a few years most of us who are interested in anime will be picking up a new manga that will be lasting for the next 10 years.