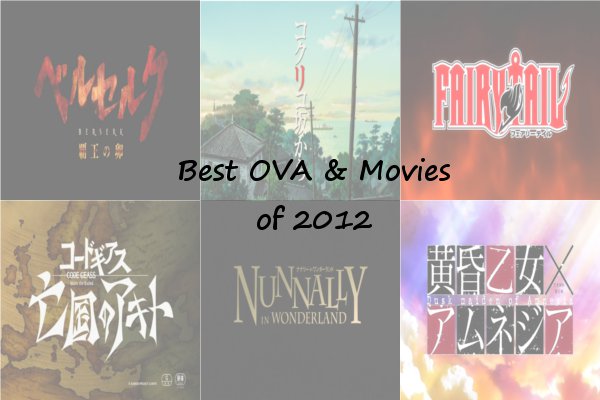 I wasn't planning on doing an OVA/Movie version of the Best Anime of 2012 posts, but then I found the time to catch up. The year had a nice mix of OVA's and movies, but my top 10 list was much easier to form than my top 12 that consisted only of TV anime.

Here's a look at what I consider the best anime of 2012 that came in movie and OVA format:

Gyo was an anime that made me laugh. I could tell this was a bad anime, but I couldn't help myself because I actually enjoyed watching this 1 hour and 10 minute piece. The best way to describe it: an anime version of a bad American horror movie.

If that wasn't enough, the Jaws meets Eight Legged Freaks (later turned Human Centipede meets zombie flick) setting was there to seal the deal. It was bad. So bad that it was actually mildly good because it provided a lot of entertainment. Fans of bad horror movies - those who know what they're watching is bad - will tell you how much fun it is to watch something like this just for laughs.

Even for someone like me who isn't the biggest fan, Gyo was the most memorable movie/ova of the year. It was so bizarre and funny that it deserves to be mentioned. I'm not putting it in the top 10 because I have good taste but I won't look down on others who do so.

There are two reasons that Tezuka's Buddha only gets an honourable mentions:

Don't get me wrong, this was a good movie. It was aesthetically gorgeous and had an interesting plot, but it lacked polishing and was a let down in some instances. In the end, it looked more like Magi instead of something by Tezuka. No disrespect to Ohtaka-sensei, but Tezuka is a legendary mangaka.

In the end it was my inability to connect to Siddhartha, the future Buddha, that stopped me from really enjoying the story. All that pain and suffering that was brought up, it didn't really feel like Siddhartha cared for it, which is big probleme. Whether it was bad voice acting or the script, the true main character of the story didn't come across as he should have.

Problems aside - haven't read the manga yet, so can't claim butchering - I enjoyed my first Tezuka experience. As a starting point, it wasn't bad and luckily there is more Buddha to come. I do hope the other movies will pay attention to the finishing touches, otherwise this should be

#10 - Sakasama no Patema: Beginning of the Day

When I thought about the #10 spot on this list, only one this short ONA series came to mind. It may be odd to put it on my top 10 of the year but think as a teaser of the upcoming Patema movie, it managed to get me interested and that deserves recognition.

With only 4 episodes of less than 10 minutes each, there wasn't much the ONA could have hoped to accomplish. It did however manage to give us a taste of the world setting and piqued my interest with the events that transpired during the four short episodes.

Sometimes you just need an ONA/OVA to get you interested in the upcoming anime movie/series and this ONA definitely did that.

Shiranpuri is an OVA from the Young Animator Project. Aimed at getting more people to the anime industry as well promoting the industry itself, the YAP churns out some pretty decent OVA's. This year, Shiranpuri was my favourite out of the lot.

It didn't look like an anime, but it's originality is unquestionable. It made full use of its sketchy animation to tell the thought-provoking story of bullying and how it doesn't just extend to physically and verbally abusing someone. Easily the most interesting of all the YAP OVA's in terms of story.

As I said, the animation wasn't all that great. Aside from being sketchy, it looked more like a western cartoon than an anime, which isn't a good notable detail. That said, the way it used the animation style was impressive and as a whole, it was my favourite OVA from the YAP this year.

Out of the two new Code Geass offerings this year, this was comedy one. Nunally in Wonderland was not meant to be taken seriously and if it was I doubt it could be enjoyed by anyone. If you laughed the whole way through it, then you had the right idea.

This ecchi-furry take on Alice In Wonderland as narrated by Lelouch was definitely enjoyable. Lelouch gave his own commentary, mixed in with heavier emphasis on his siscon nature and that made the OVA that little bit funnier.

Throw in the cast being in some pretty ridiculous costumes, and I was sold on Nunally in Wonderland. Proof that you can make a good OVA from a bizarre situation using the entire cast and not just do what everyone else wanted - more Code Geass.

Ranking an OVA that adapted a part of a manga I currently read is always a hard exercise. What I look for is how well the OVA tells the story it's adapting or if it does something to make me see the story in a different light, which is always a welcomed change.

The Tenri arc started off slowly. Comparing it to the manga made it that much harder to enjoy the first episode and were it not for the second episode I don't think I would be placing this OVA of KamiNomi on my top 10 OVA/movie list.

Luckily the second episode captured the true essence of the series and made a great finish that saved the OVA as a whole.

If you didn't like the Nunnally in Wonderland OVA, I'm sure this new Code Geass movie would be more to your liking. Much closer to the original series, this one is what the fans have most likely been waiting for from the franchise.

The first movie in the Boukoku no Akito series showed that the franchise is now making full use of the advances in animation. Using them in the fight scene of the movie really brought a new flair to Code Geass and differentiated itself from the original series.

I liked that it had a different feeling to it. It felt a little darker and less upbeat - an odd quality that Code Geass used to have. I don't find myself rooting for the main character but I'm certainly intrigued by what's going to happen in the next 3 movies. Kind of how Break Blade's first movie outlined the general plot whilst leaving a lot to be answered in the remaining movies.

A very good start, but it didn't incite the full feelings of excitement that the original series did. Not a bad attempt at least.

A Letter to Momo is an example of an anime with an over-used plot, delivering a quality 2 hours of entertainment. There was no originality to the premise of its story, but that didn't stop it from doing a great job with its characters which in turn made for a great anime.

Much like a lot of anime involving youkai, the series centred around a sad situation to be overcome. The youkai characters were there for a lot of comedic entertainment as well as actors in helping Momo with her hard situation, which of course meant character development.

A very well animated and scored youkai movie. The familiar plot does mean that whilst it did a good job, there wasn't anything new to see. This is a problem that hinders any more than a good amount of enjoyment; not the end of the world by any means but doesn't have you hoping to see more.

My favourite OVA - technically ONA - of the year. Kyousogiga was on the short side, with five episodes of 10 minutes or less. A big change from the first episode that was released last year, and for me it was a change for the better.

The first episode was definitely intriguing and got me curious about Kyousogiga. Nevertheless, I never truly enjoyed it and went into this series with moderate expectations. The change in style was visible from the first episode and had me convinced I would love this series.

Each episode attempted to do something new and artistic. The direction of each episode being different added some unpredictability to the series. A rare plus nowadays, because by the last few episodes we can predict some kind of outcome.

Also known as the 45 minute-long episode of Natsume Yuujinchou, Hotarubi no Mori e was a delightful experience. It's Brain's Base doing more of anime in the style of Natsume, so you know that you're in good hands with this one.

What made this series stand above A Letter to Momo was its overall execution being better. The other youkai anime movie was good but at times it became a little boring to watch it, whilst this series managed to do everything in the 45 minutes it was given.

Yet another touching story of loneliness and friendship, Hotarubi no Mori e is one for all Natsume Yuujinchou fans and others to enjoy. Very simple, very familiar but a better familiar than A Letter to Momo because it plays more on emotions and not character development.

One of my favourite series of 2011 was UN-GO. It was a brilliant futuristic mystery series that told the story of the world in which it's set through the cases. Each case was interesting on its own and the description of the 1984 like dystopia was done masterfully.

The only thing we didn't get to know about was how Yuuki and Inga came to be. Luckily this movie explained all of that, with an interesting story and yet another case. A little different from the usual UN-GO but more than explanatory about the events leading up to Yuuki and Inga's meeting.

Out of all the OVA and movies released for a recently aired TV series, this was by far my favourite. It not only explained everything, but it reminded me of how much I enjoyed UN-GO. It came pretty close to taking the top spot, but the next one was more deserving.

#01 - Kokurikozaka Kara (From Up On Poppy Hill)

Studio Ghibli's new film takes the #1 spot for the best anime in OVA/movie format for 2012. Cards on the table; I haven't seen a lot of Ghibli movies, so I talk with relative inexperience with the studio's works. Still, I could tell this was the best of the year.

Goro Miyazaki's last film was slammed by a lot of people. Quite sad really, but he will forever be compared to his legendary father, so he needed to step up and create something that would actually prove he has talent. This choice was not the most eye-catching.

A very simple love and school story set in pre-Olympics Japan, with great focus on characters. The characters were all engaging and memorable, undergoing personal growth with the passage of time during the movie. Nothing over-the-top, just a simple story with a lot to offer.

It was the most enjoyable to watch, which is what got it the top spot for the year. Goro Miyazaki could be on his way to direct more good works.

With that, the review has ended. Stay tuned for the final best anime of the year review, that looks at the year in more depth.