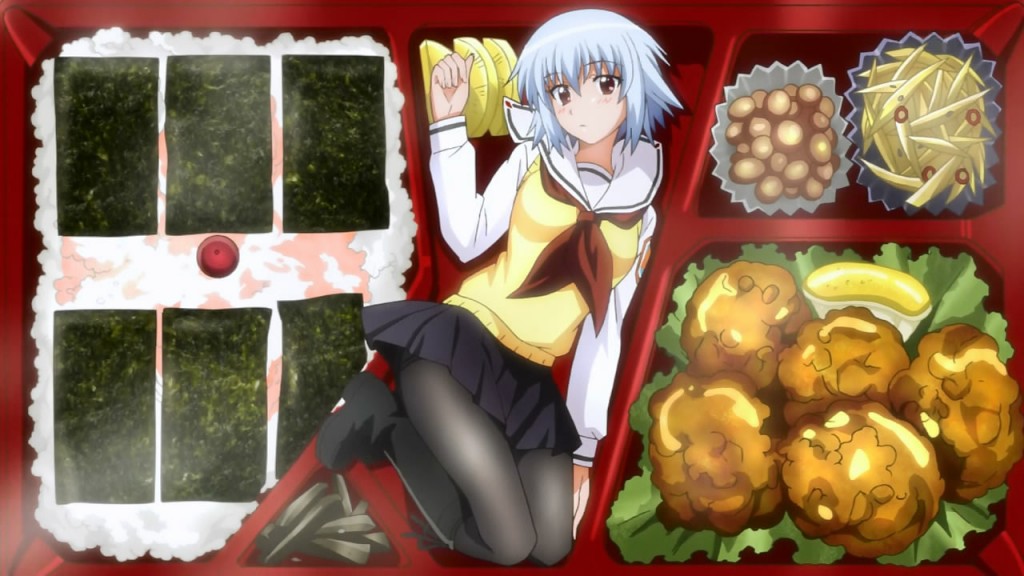 Since I like to know what I'm getting into before doing anything, I researched Ben-To before watching it first. According to my findings, the anime is based on a series of light novels written by a so-called Asaura, released in nine instalments, and apparently, the plot centres on people fighting the crap out of each other for discounted bento. No comments there. Now, on to the show.

So, we start off with the protagonist passed out on a supermarket floor with a head wound, after which we go right to the opening credits, from which I glean that the bulk of the show has to do with supermarkets, bento, and fighting. The opening song is of the general upbeat pop variety, not much to say there.

The first episode is as follows secondary student Yo Sato, of meagre income, doesn t remember the events leading up to him waking up on the supermarket floor, besides reaching for half-price bento. The next day, a girl with silver hair warns him against returning to the supermarket. Since apparently one beating wasn t enough, he goes to the supermarket again with fellow schoolmate Hana Oshiroi, where he proceeds to get another thrashing upon going for the bento at half-price. The following day, he decides to stick to the side-lines and witnesses an all-out brawl break out for the bento, the best fighter being the aforementioned silver haired girl (Sen Yarizui). Once Yo is beaten up once more, he is told by Sen to go to the Half-Priced Food Lovers Club room.

The second episode opens to the club room mentioned in the previous episode, with Sen, Oshiroi and Yo. Once Yo and Oshiroi officially join the club, Sen goes about training them for bento fighting. This episode defines the concept of bento fighting more clearly; the rules and traditions of the fighting, the different types of groups we have the wolves , who I assume are the Club members; the boar , an immensely fat person who goes after all the bento before a fight can break out, and the rugby team, who in this episode cause the wolves to rally against them. We are also introduced to a character known as Wizard, a legendary fighter in Bento Brawling circles.

This is a pretty ridiculous concept, as far as plotlines go, and I have yet to understand WHY people feel compelled to viciously fight over bento, of all things. I sort of get it, but I don t really get it. I mean, dude, it s bento. And I do take issue with the girls, in the sense that I would ask the artist to take a couple of female anatomy classes their lower halves look just plain wrong at times. Also, is it me or does Wizard look a bit like Howl Mere coincidence or a nod to the Ghibli production

I don t know. It s still early, so hopefully there s some explanation for all this. I may or may not keep watching this, 30% out of pure curiosity and 70% depending on how bored I am on Sunday nights.