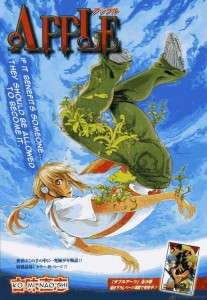 The first one-shot manga I am reviewing, I am going to review it differently to other manga. Well I will let you see how I do it inside the post.

Story: Apple begins about a boy who is living on the outskirts of Tokyo, he says he cannot live within the city because of a certain thesis which claims that he is the ultimate life form called Apple. The army is targeting him to capture him. He has the ability to transform into animals and use psychic abilities, or so the army thinks. But when they capture him with a net he also displays the ability to transform into airborne particles. The key to saving the world is acquiring the Apple. After he defeats the army and they withdraw, a suspicious guy approaches him who calls himself the Steward. The Apple invites him into his house for breakfast, where the Steward comes to observe him. The Steward then tells Apple about the thesis, and tells him that he published it, he also tells Apple that unless he serves his purpose to save the world he could die. But the Apple doesn't care if he dies, as long as he lives his life the way he wants to. He was treated badly as a child and was even classified as a different species. The Steward then decides to live with him too because he wants to save the Apple from his cruel fate of dying to save the world. But when the Steward brings his bed in, the Apple throws it away since his principle is to make things he needs and he tells the Steward to do the same. Then they live together and the Steward learns how to be self-sufficient from the Apple. Then one day the elite of the army capture the Apple and he shoots the Steward. The Apple then escapes and defeats the elite of the army and heals the Steward, after which he goes into the sky and produces a miniature black hole and destroy the meteorite. After which the Apple had lost his powers and was in the care of the Steward.