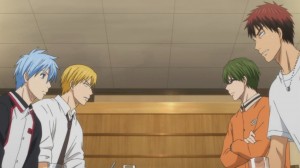 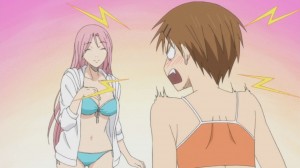 With the conclusion of the Shutoku game, this episode served as a nice cool down before the start of the next arc against a new opponent.

By almost splitting the episode in two, we got a dose of some serious conversation which is rarely seen in Shonen Sports series but really should; the question as to why people play basketball, or in fact any other sport This carries on from the previous few episodes which questioned the value of winning as a team over doing so by yourself and was a nice touch since it was an issue that was discussed by some of the strongest characters in the series (Kagami, Kuroko, Midorima and Kise). The question discussed was definitely realistic and one which will be debated until the end of time, so seeing it be debated by serious athletes was a refreshing take (to an extent since they are still Japanese high school kids).

The rest of the episode was relentless comedy, making me laugh at a variety of points before wrapping up. Just with the addition of Tetsuya #2 (the dog) we get to see Kagami, who is often described as the "tiger" of Seirin acting like a little scared kitten he rarely is and you also get the feeling that Kuroko was approaching him with the dog on purpose. To add insult to injury, when Momoi appeared Kuroko became the only guy on the team with a girlfriend and is exactly why she was questioned about her choice of Kuroko as a "boyfriend." The comedy wasn't clever and very obvious but that's what made it so enjoyable.

The ending introduced Aomine as a much stronger opponent than the 2 members of the Generation of Miracles and an opponent who'll take more effort to defeat, even more-so since him and Kagami are similar players and Kagami couldn't even put up half a fight. I do however have a bone to pick with whoever did yet another yaoi ending card with Aomine and Kuroko. 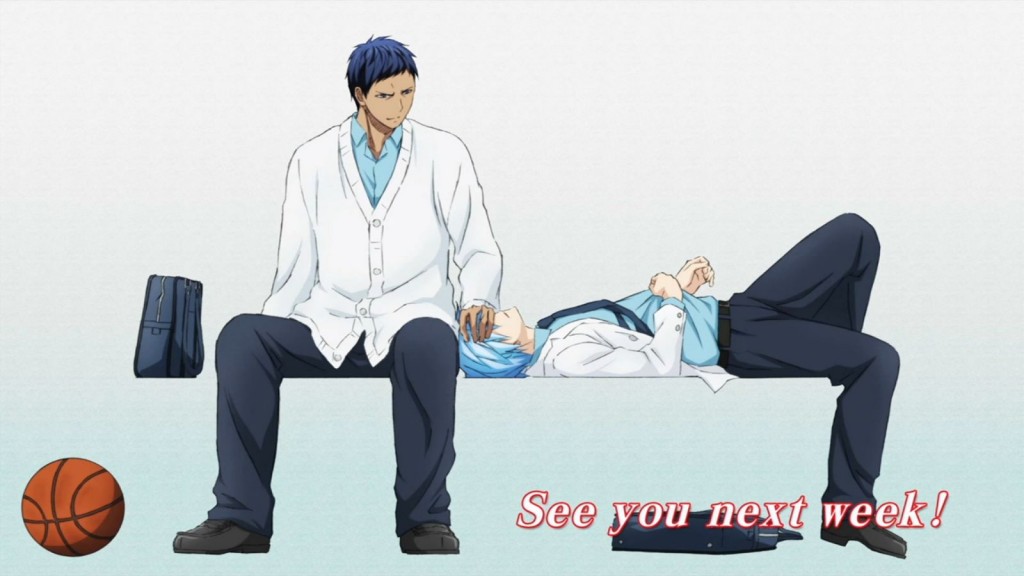 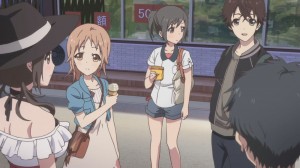 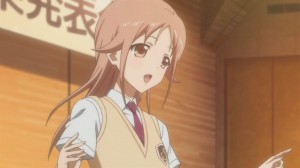 In an odd move, Tari Tari wraps up what could have essentially been the goal of the series in this episode.

One would have assumed that the recital would have/should have been saved for the last episode but now that it happened in the second episode, the remaining 11 episodes of Tari Tari have become less predictable but at the same time a little questionable. Without the having the recital as the final goal, which will bind the members of the group closer together, there needs to be another event or some type of common goal to bring together the 2 guys that didn't participate - even in K-ON! the characters had some type of a goal to reach.

Because of the sudden turn of events, the pacing felt a little off which shouldn't really happen with original series (from creation of the club to singing at the recital in less than 20 minutes) and it also ended up making the interactions with the male leads seem pointless later on when they aren't even shown in a single frame. This pacing also made the character interactions and the deepening of the friendship between Sakai and the other two girls, Miyamoto and Okita, feel rushed and in some sense unnatural.

I'm kind of puzzled to see how the series will progress but the second episode didn't do it any favours. 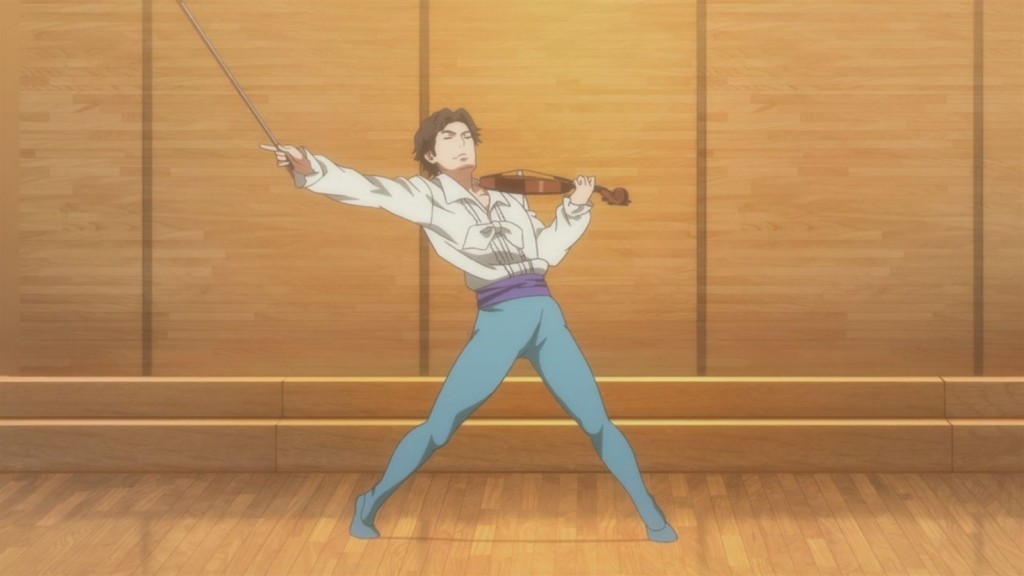 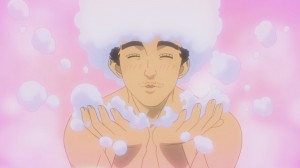 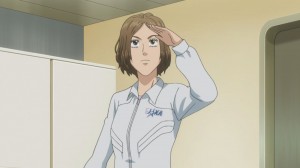 This episode of Uchuu Kyoudai was probably one I could relate to most, having spent years living with many people in shared accommodation.

Whenever your living in close quarters with even just one stranger for a period of time which is longer than a day or two, conflict becomes inevitable and trust is brought into question whenever something goes wrong; this goes double for the wannabe astronauts in competition with each other to be one of select few given the chance of a lifetime (going to space was never going to be easy).

It was good to see Uchuu Kyoudai explore the most basic nature of humans, especially since they have been placed into a Big Brother like situation which always results in power struggles and the need to place blame on others. This setting also allowed for Mutta to rise to the occasion as the most level headed person in the situation, who clearly knew how to and that he had turn away the attention from the negative in order to preserve whatever teamwork has been built up. The episode also reminded me a little of Planetes which also dealt with human psychology and space, something that is rarely explored in detail in any series whether they be about space or not.

As an added bonus some of the focus was also on Kenji, who had been stuck with these problems from the start. This focus allowed for a comparison between Mutta and Kenji, both of whom we believe to be realistic contenders for selection and seeing them both deal with their respective situations in an equally impressive manner only served to reinforce the current belief that both of them would be selected. 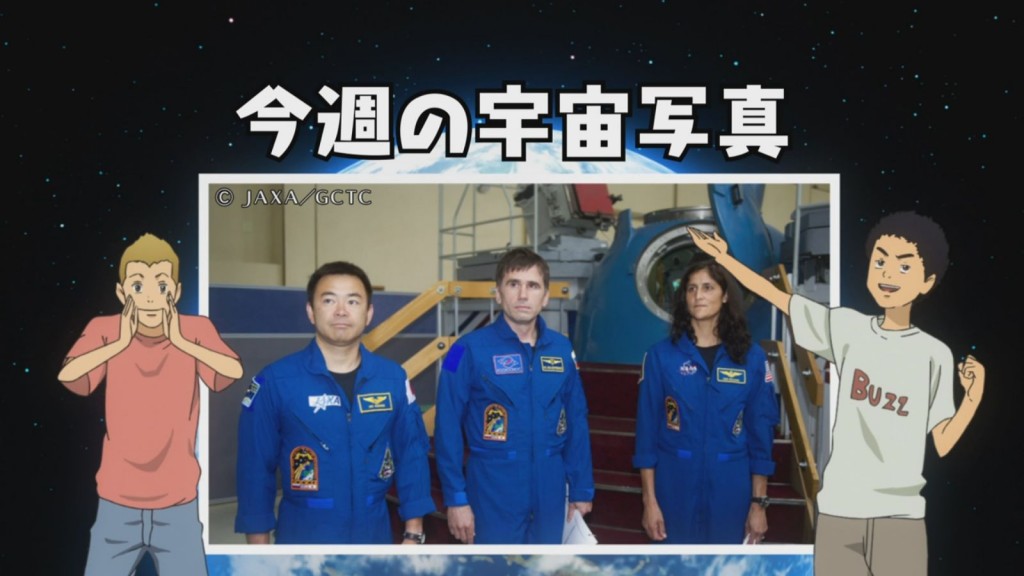 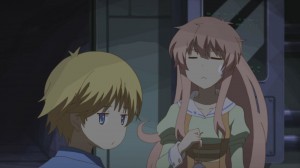 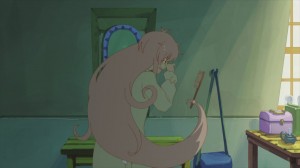 I think with this episode I've become more intrigued with "Humanity Has Declined".

Continuing on in the same manner as the first episode with all of the same (not literally) humour, the second episode passes by like a breeze; nice, refreshing and a little underrated. Aside from the usual humour brought about by Sensei's darker and manipulative side, the continued focus on politics and the political aspirations of humans was portrayed in a beautifully comedic manner and definitely made my day. The scene with headless chickens was a more silly humour but nevertheless remained fresh in spite of the idea not being all that original.

With the factory exploration being resolved, I'm excited to see what direction the series takes and whether there will be some type of continuous story line. Although if this anime turned out to be episodic I could still enjoy it and appreciate it just as much. 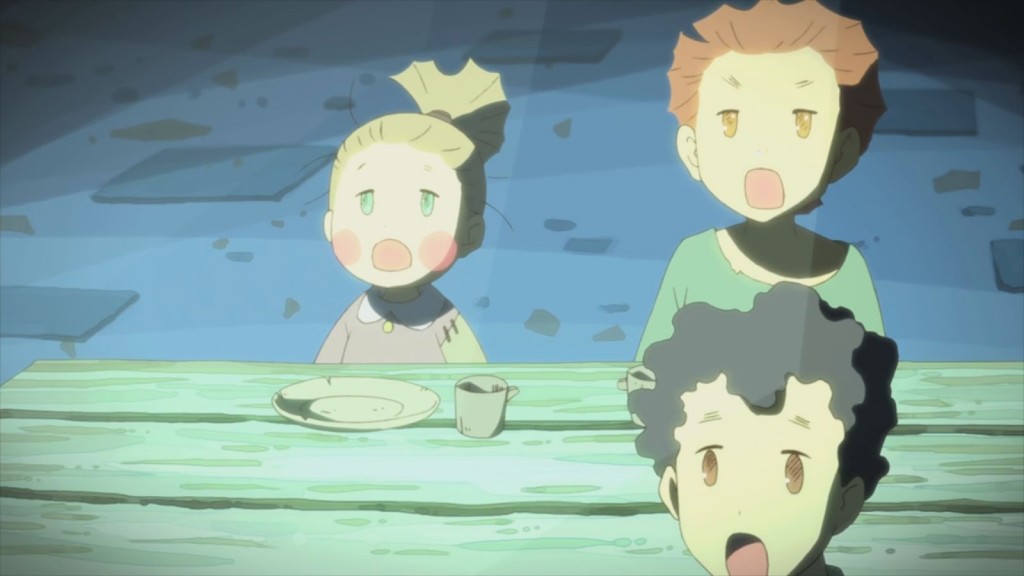 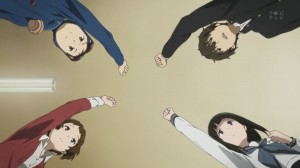 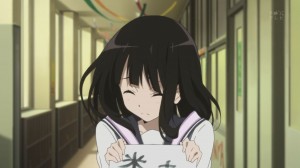 11.5 - The OVA is a trademark KyoAni light fan service piece that wasn't very good. The mystery itself was very poor and at the moment when Chitanda mentioned what was making her curious, I immediately guessed the solution to this mystery which annoyed me since it was too easy; the others aren't so complex themselves but they at least required some thought.

Other than the mystery being poor, the OVA was focused on the romantic subplot of the series which presumably would have left some people happy and others annoyed depending on personal tastes. I'm not the biggest fan of romantic subplots unless they pop up in slice-of-life series but the OVA's exploitation of the situation felt a little cheap and again too easy.

Quite a bad showing from Hyouka's OVA, and for some reason it was chosen as the introduction for Houtaro's sister.

12 - This is one of the episodes where there wasn't any actual mystery in Hyouka and instead it was just an episode for the main characters to display their true natures. In that sense Chitanda was that curious child who kept getting distracted at every corner, Satoshi was the idiot who enjoyed the simple things, Mayaka was the outsider and Houtaro was the cunning one.

I never considered Chitanda's curiosity to be that childlike until this episode, and it didn't really make me like her that much more but instead made me annoyed with her. Houtaro definitely came out on top this episode since he foresaw how little work he'd have to do whilst sending others on the fools errand; a little mean but well within his character.

Overall, I'm disappointed at the lack of mystery and the rehash of everything we already know about the main characters. There was nothing new in this episode nor was there anything that pointed towards an interesting mystery waiting to be solved thus making this a rather unimpressive transitional episode which could have been easily skipped over. The best part about the episode was the new ending sequence filled with romantic inclinations. 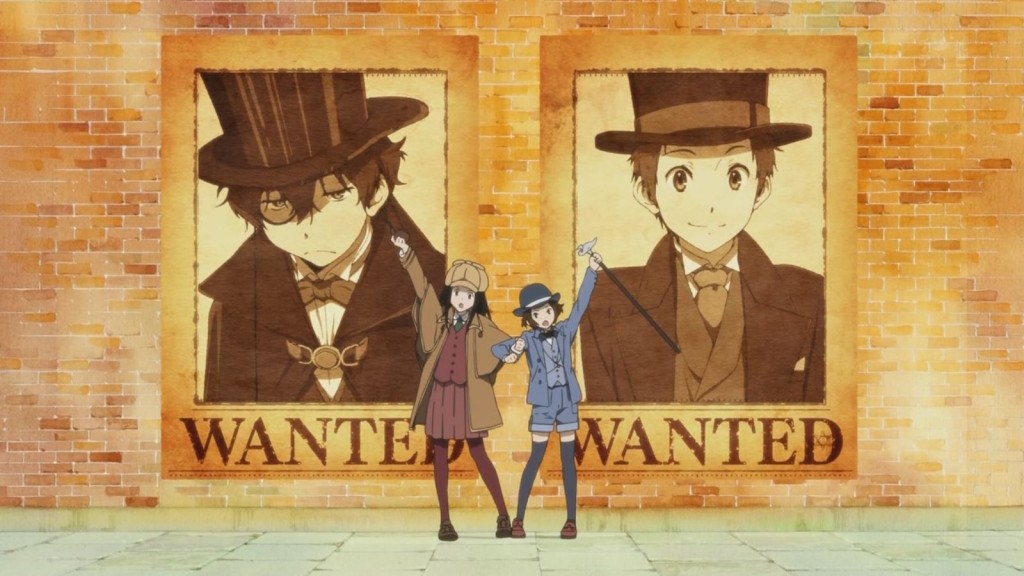