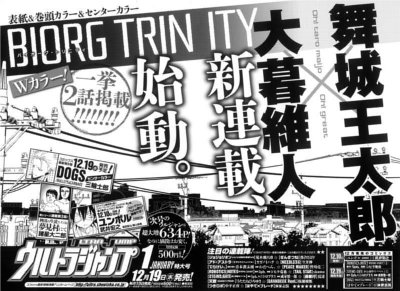 Air Gear's author Oh Great! has already got a new series. Starting in the December issue of Ultra Jump, his new work Biorg Trinity will debut. The story will be based on the original work by Ohtaro Maijo, a novel writer.

Oh Great! wrapped up Air Gear this May after a 9 year run in Weekly Shonen Magazine. The serialisation was riddled with many hiatus and so the manga ended with 357 chapters.

The announcement was made in the most recent issue of Ultra Jump, and has been promoted during the commercial break of JoJo's Bizarre Adventure episode 7. Incidentally, Maijo wrote the light novel Jorge Joestar. 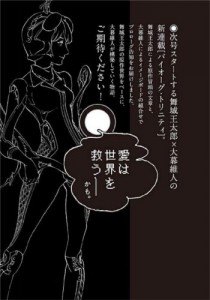 Oh Great! makes me laugh. Not just the name, but his inability to write a decent story. Air Gear was a good idea when rollerblading was still considered cool. The story became convoluted, the metaphors ridiculous and the cornyness reached new heights.

A fad that ended quickly and will not be missed by myself. At least now his story will be based on work by an author. I don't know much about Maijo, but his Wikipedia page suggests he's at least decent at his job.

Ultra Jump is steadily becoming better. Nowadays they host the Steins; Gate and Robotics; Notes manga's as well as a few action series. Being the more interesting of Jump's seinen division, it's on the rise. Frankly, Oh Great! may have found a good combination and magazine for his next work.

Air Gear ended with some semblance of popularity. I suspect it lost a few fans along the way because of hiatus, but there should be enough left to give series a big initial boost. Not to mention some nice advertising from a fellow Jump anime series.

I'm hoping this story makes sense, and I sure hope it's not filled with ramblings of a mad man.