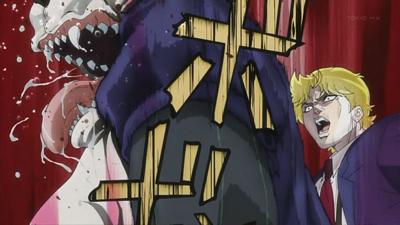 One day what popped up on my twitter feed was the most unexpected piece of news. One of the most distinguished yet underrated manga was finally being given the anime adaptation it deserved.

What followed were the responses on twitter. Everyone who knew about the series was abuzz and as long as you were following one or two people who knew about JJBA, then all was good in the world. Months later when JoJo started, I was so happy that the blogosphere responded to its awesomeness, leading to its eventual first place rank on the APR.

Ultimate announcement for anime airing next year. I've been following Shingeki for a while now and it's anime announcement had me jumping up and down like a 5 year-old. That piece of news, followed by a phenomenal PV just made me that much more impatient for the Spring 2013 season.

It also helped that DEATH NOTE's director announced a project he'd be involved with days before this brilliant piece of news came out.

If it's anything like Penguindrum, then we are in for a ride. This piece of news brought with it an entirely different reaction to the two I mentioned above. There was excitement and then there was confusion........

We want it to be as good as Penguindrum, but we can't know until it comes out.